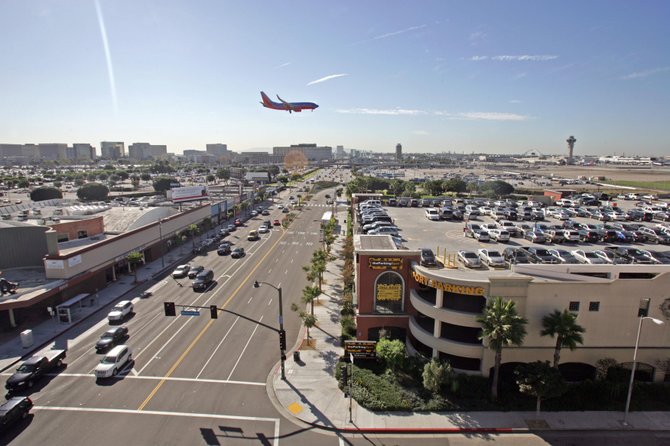 When a plan to modernize Los Angeles International Airport died five years ago, nearby business owners were relieved. They had feared any airport expansion would overwhelm their neighborhoods.

But a new airport modernization plan, released in October, is bringing the controversy back – with graver concerns. Westchester store owners believe the plan will lead to a northward expansion of the airport, and they fear being among 500 businesses that may have to move or close as a result.

“The worst-case scenario is that this could take out the business district,” said Christina V. Davis, president of the LAX Coastal Area Chamber of Commerce, which has 550 members within a jet engine’s roar from the airport. “That would be a devastating blow.”

The new plan – which includes proposals such as developing a ground transportation center, constructing an automated people mover and demolishing three terminals – could cost $5 billion to $10 billion.

Local business leaders said their biggest concern is the proposed reconfiguration of the airport’s North Airfield, which calls for moving at least one runway as far as 400 feet to the north for safety reasons. While the runways would stay within airport boundaries, they said runway protection zones mandated by the Federal Aviation Administration would require an unknown number of Westchester buildings bordering the airport to be seized and demolished under eminent domain.

In effect, it would push LAX into Westchester’s downtown business district, which could force 500 businesses to move or shut down.

“We’d like to keep the business district intact,” said Miki Payne, operations manager for H.B. Drollinger Co., a commercial property management and development firm that has hundreds of business tenants in the airport’s vicinity. Among those potentially affected, she said, is a popular In-N-Out Burger restaurant on Sepulveda Boulevard and as many as 200 other small-business tenants on both sides of that street.

The owner of one of them – Tarpy Tailors – said she could relocate but would rather not.

“Moving would be extremely expensive and disruptive,” said Sharon Leyton, who’s owned the 76-year-old business for two years. “Westchester is a very close-knit community and any disruptions would hurt.”

To hear public opinion on the latest plan, Los Angeles World Airports, which operates LAX as well as airfields in Ontario and Van Nuys, has scheduled public meetings Wednesday and Saturday this week.

Calls to modernize the city-owned airport started in the 1990s. Six years ago, the Los Angeles City Council approved an LAX Master Plan providing, among other things, for a $20 billion modernization of the airport’s southern runways and taxiway system; redevelopment of its terminal area; improvements in airport access; and various enhancements to safety, security and convenience.

The next year, however, a coalition of opponents including the surrounding cities of El Segundo, Inglewood and Culver City, as well as Los Angeles County and a community organization called the Alliance for a Regional Solution to Airport Congestion, sued to stop the plan on environmental grounds.

The plan was halted in a 2006 legal settlement. The upgrade of the Tom Bradley International Terminal was allowed to go forward, but most of the modernization plan was thrown back for reconsideration. The airport is now restarting the planning process.

After receiving public input until Nov. 29, officials said that they will prepare a draft environmental impact report.

After more public hearings, they will finalize the EIR for approval by the Board of Airport Commissioners and City Council in about 18 months.

“The meetings are intended for interested persons to give us information regarding their concerns,” said Glasgow, who declined to discuss any specific proposals.

Airport officials have, in the past, argued that reconfiguring the North Airfield – specifically by putting greater distance between its two runways and adding a centerfield taxiway – is necessary to assure the safety of the aircraft using it, especially larger planes including the Airbus 380 and Boeing 787 Dreamliner, both of which are expected to be used increasingly for international flights.

The Federal Aviation Administration wants the North Airfield – which serves larger aircraft – to be redesigned in order to eliminate a safety hazard.

“There is no physical buffer separating arriving aircraft from aircraft that are taking off on the inner runway,” FAA Administrator J. Randolph Babbitt said in an April letter to Mayor Antonio Villaraigosa.

Villaraigosa opposes the reconfiguration because he doesn’t believe the safety problem is a real issue. The airport commissioned a study, released in May, agreeing with Villaraigosa. The study concluded that, given the airfield’s current configuration, fatal runway collisions would occur on average about once every 200 years.

“My reaction was frustration, disappointment, anger and disbelief,” said Denny Schneider, president of the Alliance for a Regional Solution to Airport Congestion and a longtime critic of LAX expansion.

Should all arguments fail, Schneider said, he would consider litigation. “I don’t know what else we can do.”

David Herbst, an executive vice president of Mercury Air Group, which provides cargo services at LAX, said he favors reconfiguring the runways for safety but would rather compromise than fight.

“I believe there’s got to be some middle ground; some way to make the airport safe while keeping Westchester whole,” said Herbst, a past chamber president and former honorary Westchester mayor.

There is also some skepticism as to whether the plans will ever be translated into reality.

Ray Kuhn, owner of the local Ritz Rent A Car franchise since 1992, said he’s not worried yet.

“They’ve been talking about expanding the airport for almost 20 years,” he said. “I don’t think it’s going to happen.”