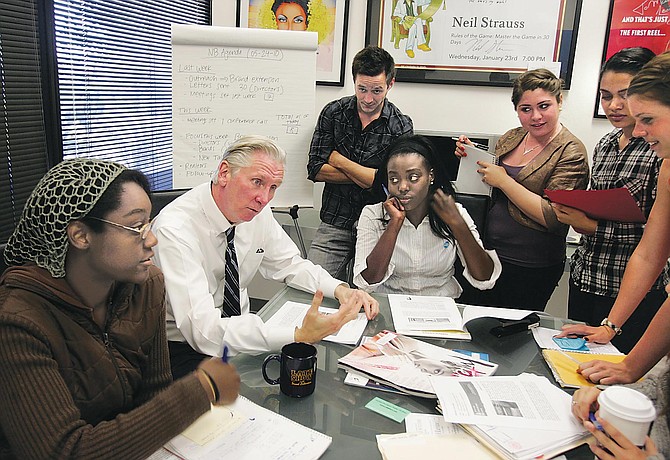 Hollywood publicist Michael Levine puts out a daily e-mail newsletter that has built a subscriber base of 317,000 people – more than many national magazines.

But after eight years, the operation doesn’t make much money, despite the inclusion of paid advertisements.

The newsletter is free for subscribers. Levine sells the ads himself, but only when advertisers contact him and ask if they can give him money in exchange for banners and buttons in the e-mail.

“If I’m lying to myself, I can say it is profitable, but that requires me to not count my time,” he said. “I spend two hours a day, seven days a week on the LBN E-Lert. People tease me because I’m so obsessed with it.”

The project started eight years ago when Levine was talking with Malcolm Gladwell, whose book “The Tipping Point” was a bestseller at the time. Gladwell coined the phrase “influencers,” meaning people who exert social power over others, particularly in terms of promoting consumer or cultural trends.

“I was fascinated by his point and I wondered if I could create a vehicle that would influence influencers,” Levine said. “That became the LBN E-Lert.”

With 500 names plucked from his Rolodex, Levine started sending a daily news summary in 2003. Today, the operation is staffed by six interns. They read more than 1,000 Web sites every day, and wade through 4,000 e-mails from subscribers offering criticism, praise and news tips. Many of the photos in the newsletter also come from subscribers.

The newsletter reaches its audience before 1 p.m. daily.

However, the E-Lert features almost no news from Hollywood, where many of its subscribers work. That’s because Levine believes the Internet has an oversupply of show biz gossip.

Moreover, he insists the newsletter is a separate, unrelated business to his L.A. PR agency, Levine Communications Office, even though some of the 10 employees at the agency also contribute to the newsletter.

“I own it, but it has nothing to do with LCO,” he said. “Is there an interconnection? I can’t discern one. LBN E-Lert is not a tool for our PR firm.”

Nonsubscribers can read the LBN E-Lert at its website, www.lbnelert.com.

But Mike Marquardt, chief executive of Internet consultancy Crest Media in Glendora, said that the newsletter serves as a marketing tool for LCO, despite Levine’s downplaying the connection.

“Whatever they’re doing, the name is on the e-mail,” Marquardt said. “It can educate the audience about what he does. It’s a viable way for touching clients and it does generate new business.”

A subscriber base of 317,000 is not critical mass on the Internet. That size might work for a specialized newsletter where the advertising is tied directly to the content, but not for the type of general interest information that E-Lert publishes. Also, print publications usually have pass-along readership, while e-mail has very little, reinforcing the need for a larger base.

Additionally, because the E-Lert has grown through word of mouth, it doesn’t have hard data on its readership. In addition, the newsletter is sent to 50 states and 23 countries, decreasing its attractiveness for regional and local advertisers, Salmore said.

“If he opens the pipeline to get more readers, it might become more than a rich man’s folly,” Salmore said. “But advertisers will want more subscribers and an alignment between the content and their brands.”

Levine’s experience with E-Lert may help him succeed in another venture, which he hopes will become a money-maker.

Six months ago he started 5W Report – a reference to the “who, what, where, when, why” of newspaper-ese. It’s a weekly e-newsletter covering lifestyle for upscale men in Southern California, and features reports and commentary on the best restaurants, sports gear and clothes from a male perspective. Levine said it is patterned after DailyCandy, the women’s fashion newsletter that was acquired by Comcast in 2008 for $125 million.

But Levine doesn’t care if E-Lert ever becomes a revenue generator. He doesn’t have any plans to sell it, either. To him, it has always been a labor of love.

“My exit strategy is death,” he said. “It’s the cutting edge of my work life and I love it. This is not a scheme to make money.”