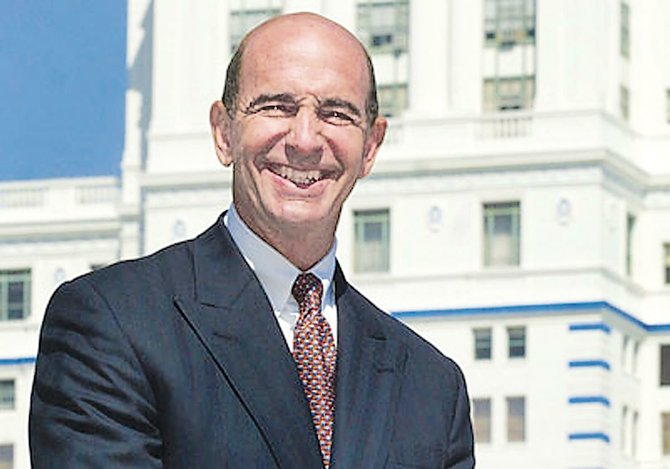 You could forgive Thomas Barrack if he’s got a severe case of déjà vu.

The real estate investor, who made a name for himself buying distressed loans during the savings and loan crisis, is once again snapping up bad assets at dirt-cheap prices.

Sure, this go-around isn’t exactly like the early 1990s. For one, banks and the government have a clearer sense that souring real estate loans may be worth far more than their current market value.

But there are still plenty of distressed assets coming to market, and the founder and chief executive of Colony Capital, a Santa Monica private equity real estate investment firm, has not hesitated to seize the opportunities.

“The last 18 months has been the best stretch we’ve had in the last six years because we were aggressive and prolific buyers of this stuff early on,” said Barrack in a recent interview.

Through its various funds, Colony Capital has acquired $3 billion in distressed commercial real estate loans since the financial crisis. By Barrack’s count, the assets have increased in value more than 25 percent.

The moves have helped place Barrack firmly among L.A.’s Angeles’ wealthiest residents. The media-friendly mogul doesn’t like to discuss his personal finances, but by the Business Journal’s calculations, he is worth north of $1 billion.

Barrack is a prime example of the kind of opportunistic maneuvering that many of the wealthiest Angelenos have engaged in recently: Cable pioneer Marc Nathanson, for instance, is buying industrial properties, while private equity titan Tom Gores is aggressively pursuing underperforming operating companies.

Yet from the early 1990s savings and loan debacle through the 1997 Asian financial crisis to today’s turmoil, Barrack has established a track record of finding value in distressed assets. It has not only brought him great wealth, but also earned him a reputation as an industry titan, said Steven Delaney, an analyst with JMP Securities, who follows the stock of Colony Financial Inc., the publicly traded real estate investment trust subsidiary of Colony Capital.

“He’s a big-picture, macro thinker with respect to commercial real estate,” Delaney said. However, all that Barrack touches does not turn to gold.

When Colony Financial went public in September, the firm had hoped to raise $500 million, but it barely drew half that. Analysts pointed to the successful IPOs of three similar REITs at the time – including Starwood Property Trust, which raised $800 million – as a drain on Colony Financial’s prospective investor base.

Still, Delaney noted that the firm’s stock has since outperformed the other REITs.

“Colony clearly has more of a focus in buying distressed loans,” he said. “People want to align themselves with a company that’s positioned to benefit from a recovery.”

Barrack got his first taste of distress in the late 1980s. The native Angeleno, who had negotiated construction contracts in Saudi Arabia and headed a California office park builder, landed a plum job handling real estate deals for Texas billionaire Robert Bass. As a principal with the Robert M. Bass Group, Barrack helped with the 1988 acquisition of American Savings & Loan, a struggling thrift.

As it turned out, the savings and loan crisis was just getting started. Over the next few years, hundreds of thrifts failed, leaving behind billions of dollars in bad loans. In 1989, the government established the Resolution Trust Corp. to liquidate the assets of failed thrifts. Spotting an opportunity, Barrack founded Colony Capital in 1991 and was reportedly the first investor to buy a portfolio of bad mortgages from the RTC.

The moves proved highly profitable, but Barrack admits even he had his doubts.

Today, things are a bit different.

At the Milken Institute Global Conference last month in Beverly Hills, Starwood Chairman Barry Sternlicht referred to the movement of capital into the distressed space as “staggering.”

But the financial institutions, who also remember how values rebounded, have not been eager to part with the loans. “The market has mostly been frustrated,” Barrack said.

That’s not to say Barrack has not been able to get his hands on distressed loans. In January, the Federal Deposit Insurance Corp. selected Colony as the winning bidder for a large portfolio of mostly delinquent commercial real estate loans from failed banks. Colony paid $90.5 million for a 40 percent stake in the portfolio, which consisted of 1,200 loans with an unpaid principal balance of a little more than $1 billion.

The acquisition came just weeks after the firm bought a portfolio of nonperforming loans from a German bank.