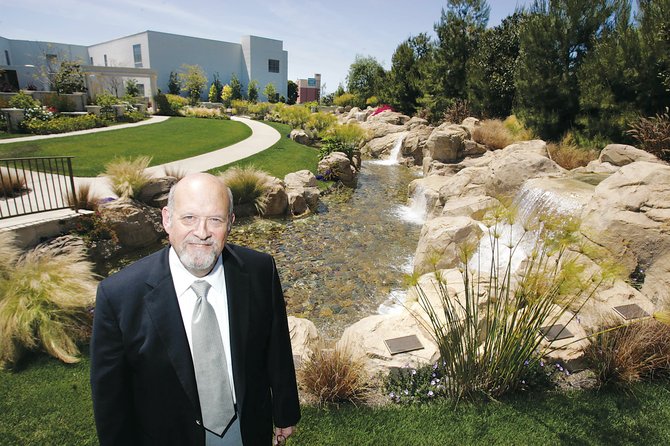 A Culver City cemetery is trying something new in the business of death. It’s going upscale. Way upscale.

Hillside Memorial Park & Mortuary has unveiled its Garden of Solomon, with a lake, waterfalls, footbridges, elaborate gates and stone formations. And while it costs $6,000 for a plot in the Jewish cemetery’s regular sections, at the Garden of Solomon the price is $80,000 for a two-casket plot. One million dollars buys a memorial pavilion for a family of 12.

“In the cemetery industry people are raving about it,” said Tom Donnelly, president of ValleyCrest Landscape Development in Calabasas, the company that designed and built the Garden of Solomon. “No question this is a trend, particularly in urban markets like New York and Los Angeles where land is at a minimum and the cemeteries want to maximize the financial returns.”

Garden of Solomon is an example of what cemeteries do in that situation. They reformulate the traditional graveyard’s layout of big grassy fields dotted with flat plaques. Instead, they opt for old-fashioned provincial gardens with flower beds, benches and water features.

The central feature of Hillside’s Garden of Solomon – a 1.5-acre development tucked in a corner of the 43-acre park – is a 130-foot-long lake formed by a series of waterfalls that cascade from 12 ponds in a rock formation. Sounds of gurgling water mask the noise from the nearby San Diego (405) Freeway. More than 4,000 shrubs and 100 trees, including many exotic species, give the garden color, and attract the birds and the bees. Visiting there is far more like strolling through an expensive, manicured park than the usual graveyard experience of walking on a football field efficiently lined with grave markers.

To cater to its Jewish clientele, the garden features Jerusalem stone, a rock imported from Israel and associated since ancient times with Jewish identity.

Mark Friedman, Hillside’s chief executive, said inspiration for the garden came from his salespeople, who felt the mortuary needed to attract upscale buyers. Planning on the project started five years ago, before the recession.

“Those were economic times that reinforced the idea of appealing to the upper end of our clientele,” Friedman explained.

Besides 181 traditional double vaults, the garden has 66 “family estates” with walls on three sides, with space for four to eight caskets. Each estate sells for more than $100,000.

On the highest end of the scale, two pavilions in the garden come with water fountains and 12 burial plots. Each sells for more than $1 million. Friedman said one has already sold.

In all, about a dozen families have purchased spots in the Garden of Solomon since it opened April 26. Friedman sees the project as an experiment that he believes will set an example in the industry.

“I know there have been major cemetery operators who have visited the Hillside property to check it out,” said ValleyCrest’s Donnelly.

Bob Pierce, a consultant with Johnson Consulting Group in La Canada-Flintridge, said the Garden of Solomon is Hillside’s answer to two challenges facing cemeteries: less available land in cities and competition from cremation for low-cost funerals.

Pierce explained that as cemeteries get close to using up their available land, they look for creative ways to charge higher prices for the remaining parcels. He cited as an example Westwood Memorial Park in Westwood, which consists of barely two acres. The park has divided its remaining space into small, personal gardens and charges hundreds of thousands of dollars for them. It contains one of the most famous celebrity vaults in the world: Marilyn Monroe’s. Other notables at the park are Natalie Wood, Darryl Zanuck, Marvin Davis and Armand Hammer.

Pierce said the strategy only works for cemeteries with wealthy customers. “If you took the same concept to Mojave and charged even $10,000, you could sit on it for a long time before you sold one.”

William Martin, communications manager at Forest Lawn Memorial Parks & Mortuaries in Glendale, said his company has long offered private family gardens. Forest Lawn even allows the family to give input to the design of the garden. The price can reach $500,000 or more.

Forest Lawn doesn’t have a space crunch, he said. The company’s five locations across Los Angeles include one with 400 acres, or nearly 10 times the space of Hillside.

“The space gives us a lot of flexibility,” he said.

Then there is the competition from cremation services.

A half-century ago, about 20 percent of the deceased in the L.A. area were cremated. Today, Pierce estimates that number is between 50 percent and 60 percent.

Because they are not getting as much business on the low end, cemeteries need to price the high end higher.

“Each year, the number of families that walk through the door and want a $25,000 casket and funeral is fewer and fewer,” he said. “Hillside is doing what they must to compensate.”

The Garden of Solomon has also incorporated cremation into its option. Boulders in the garden contain inurnment chambers where families can keep the ashes of a loved one. However, the costs are far higher than standard cremation and inurnment.

The Garden of Solomon has been so successful that Friedman has started planning another upscale garden development, tentatively called Solomon II.

“At this point, Garden of Solomon is quite a small part of the park, but it’s very important because it’s what we’re selling today,” he said. “The more successful Solomon is, the more quickly we can replicate it.”