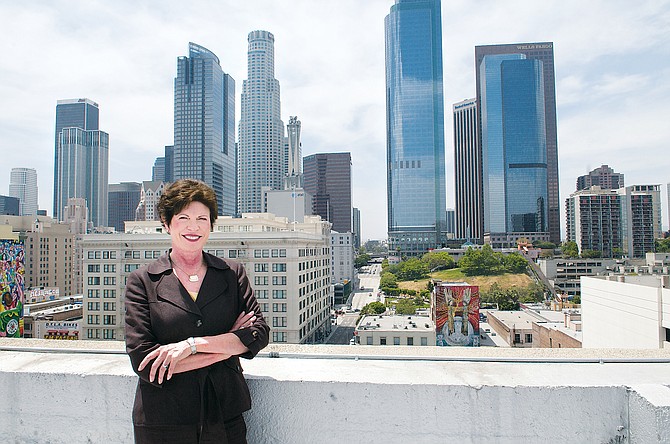 Christine Essel, 59, spent most of her adult life at Paramount, starting as an accountant and working her way up to senior vice president of government and community affairs. Along the way, Essel became increasingly interested in local and state civic affairs. That led to stints on the California Film Commission, the Central City Association and on the board of the Community Redevelopment Agency. Last year, she left the film industry to run for a seat on the Los Angeles City Council. But she lost in a bitter campaign to former state Assemblyman Paul Krekorian. As the new chief executive of the Los Angeles Community Redevelopment Agency, former studio executive Essel must guide the rejuvenation of large swaths of Los Angeles by making those areas more attractive to business. That’s especially challenging as both the city and state are slashing her agency’s budget. What’s more, the CRA has come under sharp criticism from critics on the City Council and the community that it has been unresponsive to community needs. Essel met with the Business Journal at the downtown L.A. headquarters of the Community Redevelopment Agency one week after taking the helm of the agency and talked about her goals for the agency, her career and her continuing passion for songwriting.

Question: You didn’t start out in the business world.

Answer: I was a music major in college. My mother was a piano teacher and I had been taking piano lessons from a very early age. I myself started teaching piano around my neighborhood when I was 12. I taught for 75 cents a half-hour.

What was your favorite type of music?

I grew up playing classical music on the piano. But I did catch on to the pop scene when the Beatles became famous. I was a huge Beatles fan. I really wanted to go to England and see where the Beatles lived.

Is that why you went to Europe?

I and a songwriting partner decided to leave Cal State Northridge and become songwriters on the pop scene in Europe. In Europe in the late 1960s and early 1970s, they were looking for American songwriters. And it was so hard to break into the songwriting scene here.

Who was your partner?

He was a music student I met while attending Cal State Northridge. We had complementary skill sets: As a classical musician, I wasn’t attuned to rock and roll, while he was more familiar with the popular music scene. We started writing music together and it clicked. We also began a relationship.

I fully intended to come back for my fourth year at Cal State Northridge. But then we got discovered and got some songwriting gigs, mostly in Germany. We released a number of songs as part of the schlagerparade, or hit parade, and we also performed several of our songs.

Did you have any hits?

In our first few months, we heard a song that a publisher just outside Munich was going to be releasing that we knew was going to be a hit. The publisher didn’t have any other songs to fill out the album. So we played the beginnings of four or five songs for the publisher and he said they were perfect. That featured song, “Mammy Blue,” became the No. 1 hit in Europe for several months.

Why did you decide to give it up?

After three-and-a-half years, I felt this wasn’t going to be a long-term career for me. I loved it; it was a great ride. But I wanted to come home and I decided I could become a very good accountant because I was also good at math. I felt it was time to get down to a real business career and truly be able to support myself.

How did you get to Paramount?

Did you continue to write songs?

Yes I did. To augment my income, I did play in a band on the weekends. I played the electric piano.

Tell me about working with Sherry Lansing.

Sherry came to Paramount just a few years after I did. I found her to be such an inspiration for what a woman could do in the entertainment field. At that time, there were so few women role models at any of the studios. Sherry had a real bent toward civic activism and she was the one who asked me to take on a public affairs function at Paramount. Also, after she left Paramount, Sherry became even more active in civic affairs with her foundation and her appointment to the UC Board of Regents. Seeing her choose that path helped me choose the path I’m on.

Was it hard to leave Paramount after 31 years?

By that time, I found my passion was really more with civic involvement. I had become friends with Wendy Greuel, who also had come from the film industry. When I saw her move on to the City Council, that was a motivating factor for me to pursue a council seat.

How did you get involved in city government?

It started in the 1980s after I had become a vice president at Paramount. I realized at that point that even though I had a title, I wasn’t as satisfied as I thought I would be. At the time, I did not have a family. That gave me time to get active in civic life in L.A. I volunteered at non-profits and worked with my local homeowners association. In a sense, my civic life was my surrogate family. In the late 1980s, I was appointed to chair the Hollywood Community Advisory Committee. That led to my appointment in 1992 by then-Mayor Tom Bradley to the CRA board.

What was it like to be on the campaign trail?

You cannot possibly be prepared to be a candidate until you actually go through the process. So many times a day you have to put on different hats, speaking before this group or that group. And every day, it’s up at 5 a.m. and keep going until midnight. It was a great learning experience, but physically and mentally taxing.

Did you think you could beat Paul Krekorian?

There were times I thought I had a good shot at winning, especially after I picked up what I thought were key endorsements. But things really changed during the last six weeks when it became very, very competitive. Still, I never gave up the possibility of winning until the election results came in.

What was the worst thing that happened during the campaign?

Near the end of the campaign, Paul and I appeared at a well-attended debate at Valley College. During the debate, we had three false fire alarms and the audience had to file in and out of the auditorium at least twice. Even after they shut the sirens off, Paul and I had to endure very bright strobe lights flashing in our eyes as we answered the moderators’ questions. It was a bit absurd, but that’s politics for you.

What are your goals for the CRA?

I believe the agency can be run more efficiently, both in terms of processing of projects and for our investment partners (developers, etc.). Also, I want to bring the agency in the direction of job creation. We’ve done a good job at building affordable housing and on commercial projects, but job creation has been lagging.

Yes. But I’m talking about the third leg of the economic development stool: bringing companies here that produce jobs for the long term. That means helping businesses expand and relocate into redevelopment areas. The CRA is one of the few tools the city has to bring about job creation.

You’ve also been a longtime member of the California Film Commission. What do you regard as your most significant accomplishment there?

While I’ve been on the Film Commission I have seen the dramatic loss of filming in California and Los Angeles, really starting in 1996. I think my greatest accomplishment has been to create a task force to tell the story of runaway production and what it means to our industry and the loss of jobs to our economy. That helped lay the groundwork for the tax credit the Legislature passed a couple years back.

You mentioned that the late labor leader Jim Wood was an influence on your life. That seems unusual for someone who comes from management ranks in the business world. How did that come about?

I first met Jim Wood when I was on the Hollywood redevelopment advisory committee. Interesting enough: It was in yoga class. At the time, he was chairman of the Community Redevelopment Agency, so he became a mentor to me. He was the one who suggested I apply to be a commissioner. He wanted to see someone from the Hollywood community become part of the board.

How did you find the time for all of these civic activities while also holding an executive position at a major studio?

It helped that I didn’t have any children. That freed up a lot of time that many parents don’t have.

Why did you decide not to have children? And do you regret that choice?

I was really focused on my career, moving up at Paramount. I worked very long hours. I loved my job; I loved the people there. Also, I decided pretty early on in life that having children wasn’t a driving function for me.

So how did you meet your husband?

The old adage that love happens when you least expect it was certainly true for me. In 1991, I was in Belgrade in what was then still Yugoslavia, meeting with someone who was interested in rebuilding some studios in Belgrade. I was trying to get consulting work so that our architecture and design unit at Paramount would have some work when things were slow back home. Peter was a director who was just finishing a film in Yugoslavia and was part of the welcoming party as I came to visit. Later on, he looked me up when he returned to the U.S.

What films has your husband worked on?

He made a film about the Bosnian war. Then he directed “Hard Cash,” (a 2002 release) with Christian Slater, Val Kilmer and Daryl Hannah.

You mentioned that you like to ski. Where’s the most exotic place you’ve skied?

I love skiing locally, but the most exotic place is definitely the Swiss Alps.

The most exotic place I’ve hiked is in Montana, not far from Yellowstone. But I’ve found I really like finding new places to hike around Los Angeles. I just recently discovered the Franklin Canyon area – I really love that.

Do you still have any more songs you wish to write?

Yes, I think I do have one or two more songs in me. I really would like to write a song for one of my husband’s films.

What are you reading now?

Something I have heard from a lot of people throughout my life, including my father: keeping my eye on the big picture and long-range plan, and not getting derailed by the ups and downs during the day.

Do you see the CRA post as being your last full-time position before you retire?

I’m nowhere near ready to retire yet. I still feel I have a lot more productive years in me.

EDUCATION: Bachelor’s of business administration, University of Redlands; attended Cal State Northridge and was majoring in music before leaving to pursue songwriting career in Europe.