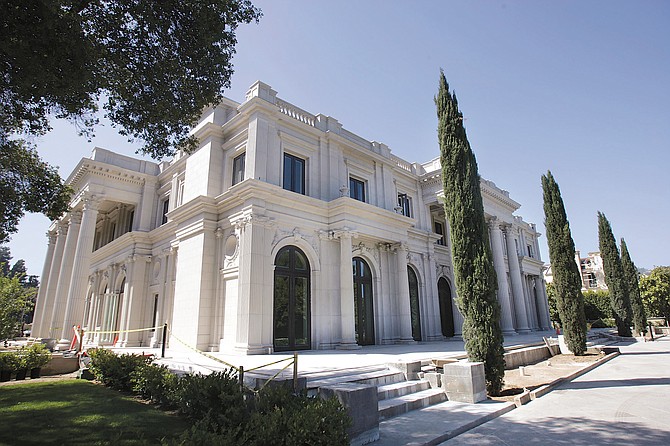 And now that it’s almost finished, he doesn’t want to live there.

Wehba, founder of Century City real estate company Bentley Forbes Group LLC, earlier this month put his Beverly Hills house on the market for $68.5 million. At that price, it would be the biggest sale in that city’s history and one of the biggest ever for a home in the Los Angeles area.

The businessman said he and his wife, Suzi, have decided to sell the 36,000-square-foot home because such a prominent display of wealth no longer made sense during the protracted economic slump. The couple also planned to use the home for charity and political fundraising events, but the recession has put a damper on that sort of entertaining.

The couple is active at Bel Air Presbyterian Church, a large evangelical church on Mulholland Drive, as well as four others. The home was built with a large music room to accommodate church events; there is a relief of a cross above the front door.

“We were never trying to flaunt, but it looks like it now,” said Wehba, 63. “We were trying to have it as a house that is open for fundraising for our church so that people can enjoy it. Maybe times will come back like that, but times are recessionary.”

The nine-bedroom mansion at 9577 Sunset Blvd. was supposed to be completed last year but is still under construction; work is expected to be finished in the next 45 days. Unlike many mansions in Beverly Hills, hidden behind hedge walls, the Wehbas’ home opens up to Sunset on two acres between Rexford and Alpine drives, so passers-by have been able to chart its progress since construction began in late 2006.

These days, a crew of 40 to 50 workers is putting the finishing touches on the mansion, which is clad in Portuguese limestone and includes French gardens, a pool pavilion and tennis court. While many parts of the house are complete, some fixtures are still being installed, including a hand-carved marble fireplace in the library, an 11-foot by 9-foot crystal chandelier in the two-story circular foyer and 24-karat, gold-plated front door knobs that weigh 15 pounds apiece.

The Wehba mansion hit the market June 7, just days before news broke that businessman Mohamed Hadid had sold his 48,000-square-foot Bel Air estate for more than $49 million. That sale is believed to be the highest price for a home in the United States in 2010.

The Wehba residence joins a handful of other high-priced mega mansions on the market, including the Holmby Hills estate of Candy Spelling, priced at $150 million. But broker Joyce Rey is confident she’ll be able to sell the Wehbas’ house, noting that there has already been interest from buyers in Asia and the Middle East.

Rey, a Coldwell Banker agent who also had the Hadid listing, acknowledged that the pool of prospective purchasers may be smaller than it was before the recession, but she said there are still plenty of buyers who could afford the asking price.

“This certain group of people is not really impacted by that,” Rey said.

The French classical design of the home was inspired by Versailles, which the Wehbas visited 20 years ago.

The home was enlarged several times during construction and ultimately became something the couple no longer wanted or needed, Wehba said.

It was designed by architect Brian Biglin of Biglin Architectural Group in Beverly Hills, who refined an American beaux-arts design of a previous architect. As the home got bigger and more ornate, the cost ballooned from about $40 million to $65 million.

“We thought it would be a smaller house and it became, ‘Well, OK, why not?’” said Wehba, chairman of Bentley Forbes, a large, privately owned commercial real estate investment firm. “We kept on adding and adding and it got kind of out of hand. It’s just so big right now. It’s more than we really wanted. The times have changed a bit.”

The Wehbas bought the land on Sunset in 2004 for about $6.7 million. The lot is the larger piece of a bisected parcel once owned by Saudi Sheik Mohammed al Fassi. The mansion drew headlines and became a tourist attraction in the late 1970s when the sheik painted its nude classical statues in flesh tones. The mansion burned in 1980 and was demolished in 1985. The smaller, 1.6-acre portion of the sheik’s former property is also the site of a new mansion. That home, at 901 N. Alpine Drive, has also been under construction for several years and remains unfinished.

Eric Johnson, senior project manager for Finton Construction, which is building the Wehba home, said the project has in some ways been more akin to a commercial development. At times, the construction crew has numbered 100 people, and scheduling is organized using computer software; commercial-level contractors have been employed for some work. “It’s a ton of fun. It’s rewarding,” he said.

Even in the competitive playing field of opulent mansions, the home’s almost Old World craftsmanship sets it apart. The exterior is made of hand-carved limestone quarried in Portugal and sent to China for finishing. (Only about a half-dozen Los Angeles homes feature exteriors of hand-cut stone, including the 52,000-square-foot Spelling mansion.) The doorknobs were fabricated at the same French workshop that has maintained Versailles. A relief above the front doorway is so detailed that toenails of the angels in the carving can be clearly seen.

Other special touches include 24-karat, gold-plated door and window hardware throughout the house; an 800-square-foot master bedroom with a ceiling slot for a 60-inch descending television; and massive his-and-her master bathrooms clad in exotic stonework.

Wehba said he and his wife still plan to decorate the home with custom-built pieces and antiques from France that they’ve already purchased, which at least will make it more attractive when shown to potential buyers.

But Wehba admitted that some of the home’s flourishes were chosen during the housing boom “back when this concept was a little bit more accepted.”

Wehba’s company, which owns marquee properties such as the infamous Watergate complex and the tallest office building in Atlanta, has not been immune from the bust. He acknowledged the last two and a half years have been “trying” but strongly denied financial troubles prompted the sale of the home.

And even if financial issues are in play, the sale wouldn’t do much to resolve them. If the home sells at its asking price, the profit will be slim – about $2.5 million, Wehba said, chuckling. “And we will probably pay it to the brokers.”

Some wonder if there is a market for the home.

First there is the attention-grabbing ornate design, which a prominent real estate broker termed “Fairfax rococo” in a 2008 Business Journal story about the property. Then there’s the location – visible from busy Sunset – which could be a turn-off for the ultra-rich who often prefer the security of isolated compounds.

Stephen Shapiro, chairman of luxury brokerage Westside Estate Agency, said he doesn’t have a single client who is in the market for a home in the price range of the Wehba house.

“The high-end people that I have as clients want privacy, they don’t want a statement or exposure,” said Shapiro, who hasn’t toured the property.

A deal at list price would be a record for Beverly Hills but not for Los Angeles County. That was set when former Global Crossing Ltd. Chairman Gary Winnick bought an eight-acre Bel Air estate for about $95 million in 2000.

Rey, who has the Wehba listing with Mauricio Umansky of Hilton & Hyland and Jade Mills of Coldwell Banker, didn’t hazard a guess about when the house might sell or how things would shake out in terms of price.

“Normally in this price range you don’t get multiple offers – but it could happen,” she said.

It isn’t even the only house the Wehbas are trying to sell. They have also listed for sale the 10,000-square-foot Beverly Hills home that they’ve lived in for more than a decade, though Wehba said they don’t plan to leave Los Angeles. Instead, if they sell one home, the plan is to live in the other – though the goal is to unload the Sunset mansion.

He said he’d feel a tinge of sadness when the home sells, though he noted that he and his wife have built about a dozen homes before. This one may not be the last.

“We will probably do it again.”

The Wehbas’ 36,000-square-foot, nine-bedroom residence includes detailing and features fit for the Palace of Versailles. Among the appointments:

• All door and window hardware is plated in 24-karat gold. The front door knobs are intricately carved and weigh 15 pounds. One shower has a gold-plated fixture that weighs 35 pounds.

shower made out of green onyx, while another room features red and purple Calacatta Viola marble.

• A 12-foot-tall bronze sculpture of angels, cherubs and minstrels is the centerpiece of a fountain that fronts the mansion.

• The home’s electrical and security systems are connected by about 30 miles of wiring. The 800-square-foot master bedroom has a slot in the ceiling from which a 60-inch television will descend.