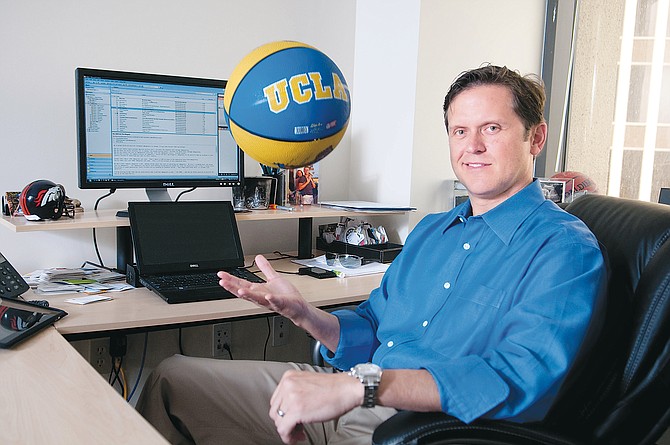 Today, RotoHog hardly bears a resemblance to the fantasy sports website Kelly Perdew took the reins of in June 2008.

The Westchester company has recently made a name for itself as a creator of fantasy games for other businesses, including Sporting News, NASCAR and Us Weekly. But it was initially launched in 2006 as a stand-alone game site that could compete directly with fantasy sports giants like ESPN and Yahoo Sports.

The 43-year-old Perdew was brought on as the company’s new chief executive two years ago with one main objective: to make it profitable. His resume included running companies such as amateur sports website Eteamz.com, but he’s perhaps best known as the winner of season two of the NBC reality television show “The Apprentice.” He beat other contestants for the chance to work for Donald Trump under a 14-month contract.

Almost immediately after arriving at RotoHog, he put into motion a complete transformation of the company’s strategy.

“I don’t think a lot of people could have pulled it off,” said Kent Smetters, who co-founded the company with his partner David Wu. “Kelly evolved the model into a different kind of company.”

Rotohog.com went live in early 2007 offering fantasy leagues for the National Football League, Major League Baseball and other sports with a twist. To make the leagues more competitive and protect against bad trades among contestants, each player was valued in a unique stock exchange.

However, despite raising about $9 million, the site struggled for nearly two years. The problem? Perdew saw that bigger competitors such as ESPN had a captive audience by virtue of their news content, whereas at the end of the football or baseball season, RotoHog’s users left the site.

“They had spent a significant amount of money to drive eyeballs to the website,” Perdew said, “but there was no path to profitability.”

However, Perdew knew that ESPN and other competitors such as Fox Sports were running their games on older computer platforms that would likely need significant upgrades in a few years. He saw an opportunity for the company to reposition itself from a fantasy sports website to a games provider for other brands, moving from a consumer model to a business-to-business model.

“So I said, OK, we should become a platform that could basically replace their entire back end,” he recalled.

Not only that, Perdew moved for the company to expand its games beyond sports to broaden its appeal to other industries that want to use online games to interact with their customers.

After selling RotoHog’s board on the idea, Perdew had the company hunker down for a year while it developed a new Internet platform that could serve as the template for scores of websites.

Within the first three months, he had let go of 25 of the company’s 40 employees, many of whom had been hired to build content for a website that was no longer the focus. But the head count went back up to about 30 as he hired a new team of software developers.

“Don’t mention that time to any of the guys here,” he said, referring to the turmoil.

In September 2009, after more than a year of development, RotoHog launched its new platform. In the 9 months since, it’s developed 37 games for other companies, including those in the entertainment, consumer brands and gaming industries.

Among the games are one developed for ABC reality television show “The Bachelor,” which features trivia questions and gives out sponsored prizes, encouraging users to go back and watch old episodes online to get the answers. Another for Us Weekly allows fans to guess who will be featured in the magazine.

“I think more brands and more webites are looking at different ways to engage readers, and gaming for a certain demographic is interesting,” said Romina Rosado, executive producer of UsMagazine.com.

The company has also been working on a fantasy game on Facebook for newly launched Bloomberg Sports, which sells sports analysis to fans and fantasy players. The game will challenge users to pick successful hitters and will go live by the end of June.

Bill Squadron, the head of Bloomberg Sports, said the idea behind the game was to encourage users to buy the company’s baseball analytics for a leg up on the competition.

“Hopefully that’ll both let them know about it and drive sales of that product, and at the end of the day that’s the real goal we have,” he said. “You’re going to see a big number of major brands experimenting with this in different ways.”

RotoHog hasn’t yet reached profitability, but Perdew said the company is “this close.” Competitors such as Fanball also provide fantasy games for other companies, but Perdew claims no other providers cut across as many industries.

Another edge appears to be Perdew himself. He said the recognition from being on “The Apprentice” has helped the company get exposure through media coverage and speaking engagements. It’s even helped get meetings with potential investors.

“We’re pretty much able to get to anybody we need to talk to about stuff,” he said. “It’s a nice icebreaker for discussions. People are always asking me what’s up with Donald’s hair. I never answer that question.”

THE NUMBERS: More than $1 million in revenue in the last 12 months.