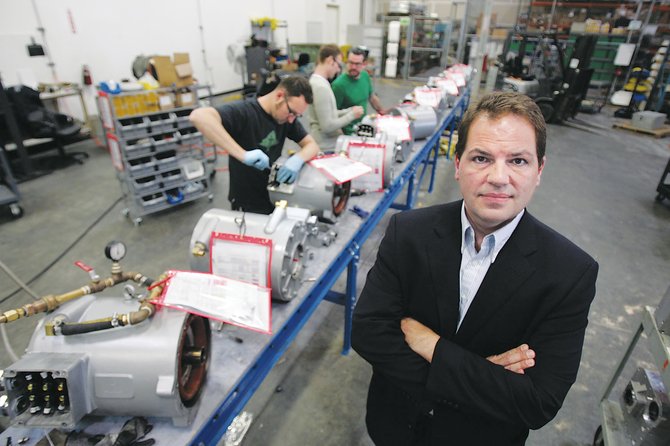 Has Enova Systems finally had a breakthrough?

The Torrance-based maker of hybrid and electric drivetrains for trucks and buses has signed two major contracts in recent months that the company expects will provide a major boost to revenues.

One contract calls for Enova to supply electric trucks to the federal government; the other is an agreement to supply electric drivetrains to Freightliner in Gaffey, S.C., the nation’s largest truck chassis maker, a division of Daimler Trucks North America LLC.

But with the company posting losses for the last several years, will these contracts be enough to pull the company out of the red?

And can a company with a mere $5.6 million in revenue last year continue to snag contracts as it goes up against multibillion-dollar companies eager to get a piece of the electric vehicle market?

Enova Chief Executive Mike Staran thinks the answer is yes on both counts. He said that when Enova beat out billionaire players like Eaton Corp. of Cleveland and German titan Siemens AG for the federal General Services Administration contract in February, the industry was forced to take notice of the small company.

“These developments have begun to separate us from the pack and make us a legitimate company in people’s eyes,” Staran said in an interview in late May before taking off on a road show to promote Enova’s products to potential customers.

But one of the few outside analysts who cover the company isn’t as optimistic.

Marco Rodriguez, at Stonegate Securities Inc. in Dallas, said he has seen similar announcements before, but they haven’t led to major revenue gains for the company.

“It just seems that announcements like these have been made before over the years and the execution has come up short,” Rodriguez said.

He said part of the problem is that Enova’s customers – manufacturers of electric and hybrid-electric trucks and buses – don’t sell as many vehicles to truck and bus fleet operators as initially forecast. So the deals Enova has announced haven’t led to as many sales of

“This may be why Enova’s revenue often comes in lower than expectations, as they did this past quarter,” he noted.

The company’s revenue in the first quarter were $929,000, up 35 percent from first quarter 2009, but only about half of what Rodriguez said investors had been expecting.

The company posted a net loss of $1.7 million for the quarter, which Rodriguez said was in line with market expectations.

But Enova’s Staran said the two recent announcements can generate more significant revenue and eventually break the trend of losses. The company’s guidance for 2010 now calls for about $15 million in revenues, triple last year’s level.

Staran said the market for electric and hybrid-electric trucks and buses has been growing as government regulators have focused more on limiting emissions from trucks and buses. In California, for example, strict diesel emissions on trucks will start to kick in by 2013.

Enova delivered its first electric van to the General Services Administration in May.

But because this contract comes up for renewal annually, Enova’s competitors will be closely watching the company’s ability to deliver quality drivetrains to the government, one industry observer said.

“There are a lot of other very well-capitalized companies out there,” said John Boesel, chief executive of Calstart, a Pasadena non-profit that promotes the growth of electric vehicles and other clean technologies for transportation. “Enova now has to prove it is quicker and more nimble than those companies.”

Enova has already proved it’s a survivor. The company was founded in 1976 as U.S. Electricar Inc. and was one of the first companies in the electric vehicle market. For much of its existence, the company focused on research and development and remained a small niche player, supplying small quantities of electric drive systems to vehicle manufacturers. (Many of those have gone out of business.)

In 2000, the company changed its name to Enova and moved into the burgeoning hybrid-electric vehicle market. It became one of a few manufacturers to make both electric and gas-electric drivetrains.

In the past three years, the company has signed contracts with Navistar International Corp., one of the world’s largest truck and bus manufacturers in Warrensville, Ill.; First Auto Works, one of China’s largest vehicle manufacturers; and Smith Electric Vehicles, a long-established British company that recently entered the U.S. market.

Yet even with all these contracts in hand, volumes remain small. Electric and hybrid-electric trucks and buses have until very recently been a small market, populated mostly by “early adopters.”

There’s been another problem, too, especially with all-electric drivetrains: limited battery life.

A typical fleet bus or truck lasts 10 to 12 years. But the batteries that power the electric drivetrain only have warranties that last three years, and they cost thousands of dollars to replace. So truck companies and fleet operators are reluctant to switch to electric drivetrains.

“I can’t tell you how many times we’ve talked with potential end-use customers and they ask, ‘You mean, if we buy an electric truck, we will have to replace the batteries three or four times?’” Staran said. “It’s often a deal-killer.”

That means Enova’s end-users tend to be those truck and bus companies, and fleet operators that choose to be early adopters of electric vehicle technology and as such are willing to take the risk of frequent battery replacement.

“We won’t be able to grow into a $100 million company until there are batteries available with warranties of at least seven years,” Staran said.

Instead, Enova has been preparing to enter the engine retrofit market, specifically to help cash-strapped truck and fleet owners meet looming environmental deadlines.

“This is a very promising area because it’s usually cheaper to replace a drive system than it is to replace an entire vehicle,” Calstart’s Bousel said.

Staran said the company expects its first retrofit contracts during the second half of this year.

But analyst Rodriguez said that for Enova to really capitalize on this market, it will have to scale up production.

“The company would need more capital to produce on a massive enough scale to really take advantage of the retrofit market,” he said.