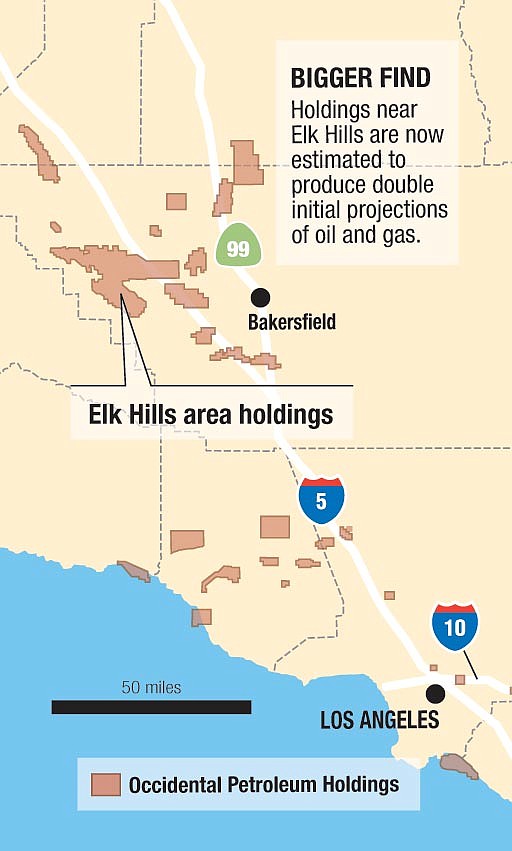 For L.A. oil giant Occidental Petroleum Corp., the fallout from the disaster unfolding in the Gulf of Mexico looks like a vindication of its strategy to focus on land-based oil production, especially here in California.

Last month, as President Obama ordered a moratorium on all deepwater offshore drilling permits, Occidental doubled projections for major oil finds on holdings near Bakersfield that it announced last year. Occidental also revealed that it has begun exploring for extensive oil reserves in several shale formations throughout the state.

These developments are the result of a 12-year effort by Occidental to boost holdings and production close to home, starting with the 1998 purchase from the U.S. government of the vast Elk Hills oil field west of Bakersfield.

“We built our acreage and invested a lot of money here in California over the last 12 years and now it’s paying off,” said Chief Financial Officer Stephen Chazen.

The company’s focus on California began to pay off in July when the company announced an oil find in Kern County, near the Elk Hills site, that it initially estimated at about 150 million to 200 million barrels. (Occidental has kept the exact location of the find secret so competitors won’t buy up surrounding parcels and encroach on the oil.) Subsequent exploration of the field led Occidental in May month to revise its estimate to between 400 million and 500 million barrels.

Occidental has nearly 800 million barrels of proved oil reserves in the state, about 25 percent of the company’s global reserves.

Chazen last week told the Business Journal that nearly one-fourth of the company’s capital program over the next five years will be focused on California. That’s a higher percentage than the company announced four years ago, when Occidental was concentrating on boosting international joint ventures, especially in the Middle East.

Occidental is still racking up the occasional major deal abroad, including a recently announced joint venture in Iraq. But the company’s major push is now in its home state.

“We’ve been successful here in California,” Chazen said. “And we expect that to continue, with much of our production growth taking place here over the next five years.”

Much of the growth will be in a fairly new arena for Occidental: attempting to extract oil out of shale formations throughout the state. The company unveiled the details of its shale efforts at a presentation to analysts in May.

Shale oil is typically embedded in rocks and has not fully biodegraded. It’s more difficult and costly to extract, so quantities have been limited. In the United States, most of the focus on shale oil has been in the Rocky Mountains and in the Texas-Arkansas region.

Occidental has extracted some oil from shale formations in and around the Elk Hills field, but now the company is looking at its other California holdings for shale oil.

In the analyst presentation, Todd Stevens, Occidental’s vice president of California operations, said the company was launching a four-year program to find what could be up to 20 billion barrels of shale oil on its holdings throughout the state, drilling 10 to 15 test wells per year.

“The most exciting thing about this for Oxy as I sit here today is we think in the next 10 years, this could actually become the biggest business unit at Occidental,” Stevens told analysts.

One of the analysts who listened to the presentation found it intriguing.

“We don’t see this as a major growth driver right now for Occidental, but it very well could be in the next five to 10 years,” said Pavel Molchanov, an analyst with St. Petersburg, Fla.-based Raymond James Financial Inc. (Raymond James has received compensation from Occidental for services rendered.)

In addition to its California production efforts, Occidental will be handling a new joint venture in Iraq and has other projects in Libya, Qatar, Bahrain and elsewhere around the globe. The Iraqi joint venture, signed in January, is in the oil-rich northern part of the country. Occidental’s partners include Rome-based Eni S.p.A and South Korea-owned KoGas.

But one thing it won’t be doing: ramping up offshore oil drilling, especially in the United States. Occidental does have some wells just off the Long Beach coastline, but those are shallow-water operations that have been producing for decades, in contrast to deep-water drilling, which is what BP and its contractors were doing in April when disaster struck in the Gulf of Mexico.

“Offshore oil production is not our main skill set,” Chazen said. “For those companies that have focused offshore, it’s going to take longer and be much more expensive given recent events. But for us, we’ve made a choice to go onshore, especially in California.”