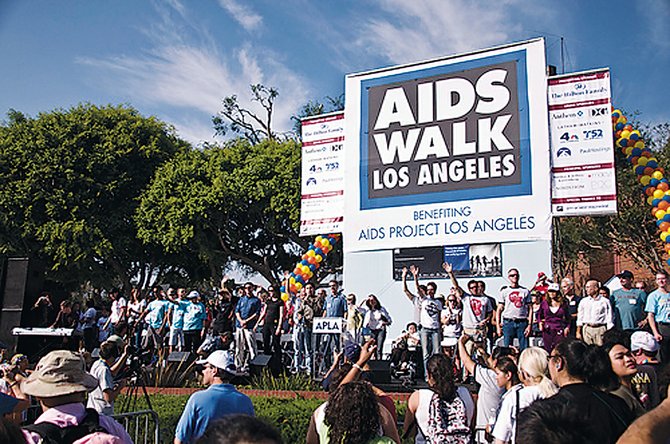 Since its establishment in 1985 as the world’s first such event, AIDS Walk Los Angeles has built itself into the premiere fundraiser of its type in town.

Madonna and Elton John have waved to TV cameras over the years alongside other participants to raise money for the event’s non-profit organizer, AIDS Project Los Angeles.

So organizers were alarmed recently to see fliers for a first annual California AIDS Walk scheduled just three weeks before their own Oct. 17 event. Even more unsettling: The new walk is being staged by Michael Weinstein’s AIDS Healthcare Foundation of Los Angeles, which allegedly undercut a similar AIDS walk in Florida.

“They didn’t talk to us in advance and they clearly didn’t try to not compete with our event,” said Craig Thompson, executive director of AIDS Project Los Angeles. As for the timing of the new benefit walk, he believes “there was some strategy here to put the event when it was.”

Thompson and his team felt threatened enough to hit back with a lawsuit that has raised eyebrows in the city’s non-profit community. It demands that the new walk in Griffith Park change its name, move dates and use a less similar logo.

AHF’s leaders, who head the largest AIDS health care provider in the country, say that there’s room for two walks in Los Angeles. They also say that their event, which features music performances and food trucks, is clearly different.

“I think it’s healthy competition,” said AHF President Weinstein, a prominent figure in the nation’s AIDS community. “I think it’s innovation. I think we’re trying to do something new.”

The dispute comes amid a tough year for AIDS organizations. The state has slashed funding by $85 million, or more than half. But it’s not just AIDS groups that have suffered. The clash appears to highlight escalating competition among non-profits in general at a time when funding has become scarce all around.

Local non-profits, including the Union Rescue Mission in San Pedro and the Greater Los Angeles Chapter of the American Red Cross, have reported decreases in donations topping 20 percent so far this year. A proposal by President Obama to cut the tax credit for charitable giving could further discourage giving starting in January.

Maura Harrington, chief operating officer of the Center for Nonprofit Management, a downtown L.A. firm that provides consulting services, said that non-profits often jockey for funding behind the scenes.

But she said the open confrontation between the dueling AIDS walks is rare and could reflect the difficulties charities are having raising money.

“I don’t recall anything that aggressive or obvious,” she said. “This is something that strikes at the core of fundraising efforts.”

Both organizations were founded in the 1980s amid the AIDS epidemic, and have coexisted peacefully for years. AIDS Project Los Angeles came first, in 1982, offering such services as counseling and housing to AIDS patients, while also focusing on prevention and policy advocacy. It has stayed relatively small and local, with an annual budget of $18 million.

The AIDS Healthcare Foundation was established five years later as AIDS Hospice Foundation to provide death-bed care to patients, but has gone global under the aggressive leadership of Weinstein. Today, its annual budget of nearly $180 million funds treatment clinics in 22 countries.

Thompson, in fact, worked for Weinstein as chief financial officer of AHF in the mid-’90s. Dana Miller, whom Weinstein tapped to be the organizer of the California AIDS Walk, was chairman of AIDS Project Los Angeles around the same time.

But this past year’s financial difficulties seem to have strained relations between the two organizations. AIDS Project Los Angeles lost out on $1.7 million in state funding due to budget cuts, and it’s been tough to keep up with rising needs and medical costs, Thompson said.

“Fundraising is difficult now on all levels,” he said. “Our walk makes up over $3 million of our budget. It’s very important.”

AIDS Healthcare Foundation, on the other hand, gets most of its funding through self-run enterprises such as its Out of the Closet thrift stores and AHF pharmacies. Weinstein admitted the foundation has seen a drop in donations, but he maintained the charity is growing, not struggling.

One of the reasons for California AIDS Walk, he said, is that much of the money will go toward other needy AIDS charities in town that have been hit harder by the downturn. “We’re trying to help organizations that are really struggling for their survival.”

Still, this isn’t the first AIDS Walk-related controversy for the AIDS Healthcare Foundation.

“Our numbers have been affected dramatically. They’re killing us,” said AIDS Walk Miami spokesman Christopher Donahue, who added that the similar names and dates create confusion. He said AHF even opened a thrift store down the street from his organization’s own store.

Thompson said he was unfamiliar with the situation in Miami and Fort Lauderdale, but argued that non-profits should keep a “community calendar” to avoid overlapping events.

“If (AIDS Project Los Angeles) had done this in April and called it an AIDS Festival, we would be thrilled to support them,” he said.

But Weinstein said he wasn’t aware of any code or informal rule that his group was violating.

“Why should one group have a monopoly over a geographic region?” he said. “There are over 100 walks in the United States. What is too close? What is the demarcation?”

In some ways, the clash is not surprising given the reputation of the AIDS Healthcare Foundation and Weinstein, who is known as a fearless activist willing to take on anyone.

“They’ve always been aggressive in advocacy,” Thompson said. “Where we’re disappointed is we’ve never seen them go after someone else’s private fundraising in this type of an effort before.”

“They’re the ones suing us,” he said, adding that he was “stunned they would go to these lengths.”

Whether the dispute can be resolved outside of court is uncertain. Both sides claimed they had reached out to the other but received no response. Weinstein said he even tried to flag down Thompson last week at a White House event promoting Obama’s new AIDS strategy, but that the two weren’t able to talk.

Regina Birdsell, executive director of the Center for Nonprofit Management, said she has little doubt the tight fundraising environment contributed to the clash. She just wonders if it’s the first of others to come.

“It’s a competitive market, and we’ve certainly seen in the last 18 months that it’s even more competitive, given the reduction in individual giving, government dollars, foundation grants and corporate giving,” Birdsell said. “Everyone’s looking to try and find new sources of revenue to make up for those reductions and cuts.”