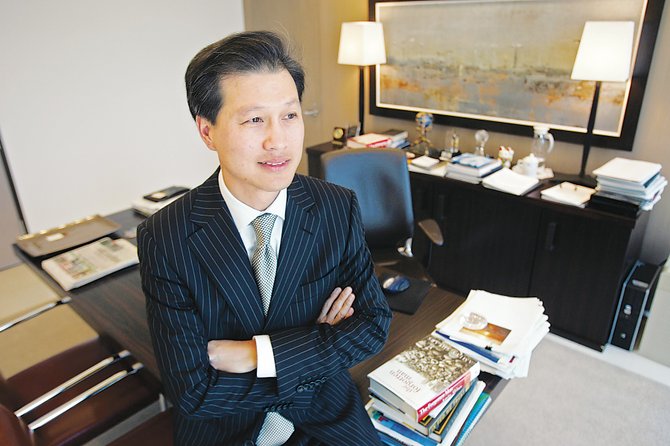 Yet East West would not be where it is today if not for a critical turn two years ago.

Dominic Ng, who took the helm of the bank in 1992 amid the savings and loan crisis, had an uneasy feeling about the weakening housing market in spring 2008.

“I saw enough signs out there in the market that this crisis can potentially match what happened in the early ’90s – and it turned out to be much worse, right?” recalled Ng, 51, during a recent interview in his office overlooking downtown Pasadena. “I said, ‘You know, we better get serious,’ and that’s what we did.”

As a result, while other banks are still working through their troubled portfolios today, East West is able to pick up failed competitors and grow at an unprecedented rate.

Since November, the 37-year-old institution has nearly doubled its assets to $21 billion through a pair of acquisitions, becoming the largest commercial bank in Southern California and the largest Chinese-American bank in the country. The moves put it ahead of longtime regional powerhouse City National Bank, which has also completed several failed-bank acquisitions to push its assets to more than $20 billion.

According to industry research firm SNL Financial, East West Bancorp Inc., the institution’s holding company, is the 27th largest in the country. The bank now has 140 locations, far more than the 71 of a year ago. In the process, East West is rapidly outgrowing its community bank label.

“It is a milestone,” Ng said. “We’ve always been California driven. Now, suddenly we have branches in Seattle, Boston, New York, Atlanta, Houston.”

Ng, who had established the China Business Division at Deloitte & Touche, came to East West in 1992, when it had just about $1 billion in assets. In 1995, he converted the institution to a commercial bank so it could better finance businesses.

By 2000, Ng had more than doubled the size of the institution through several small acquisitions. The community bank, which remained tightly focused on the L.A. area, continued to expand through organic growth and acquisitions, climbing above the $10 billion threshold by 2006.

Like other banks, East West rode the housing market boom to great heights, lending to homeowners, developers and builders.

However, as Ng saw the first signs of trouble in his bank’s loan portfolios, he remembered his time working for Deloitte in Houston during the 1980s. There, he saw firsthand how a city dependent on one industry – in Houston’s case, energy – could be ravaged when that industry collapsed. The oil glut and rock-bottom oil prices in the mid- to late 1980s resulted in the loss of hundreds of thousands of jobs and a devastated local economy.

So by early 2008, as the financial crisis began to heat up and its link to the pierced housing bubble became apparent, Ng quickly took action.

The bank raised $200 million in capital at a time when few community institutions were doing so, took a $55 million provision against possible loan losses and spent millions on a thorough appraisal of its entire construction and development loan portfolios.

“Just in case,” Ng said he kept telling himself.

The benefits were not immediate or even apparent at first.

Julianna Balicka, an analyst with New York’s Keefe Bruyette & Woods Inc., said that East West initially looked to be in as bad a shape, if not worse, than many Chinese-American institutions.

“It was struggling with construction as much as everyone else,” she said.

And as one of the first banks to admit to its problems, East West became a target of short-sellers hoping to make a few bucks on its decline. At one point in early 2008, more than one-quarter of all of East West’s outstanding shares were being shorted.

Ng said it was difficult for some employees to accept the bank’s aggressive stance, but most came around to his way of thinking.

“He challenges himself and he challenges everybody to do better,” said Emily Wang, who has worked as marketing director underneath Ng since he joined the institution. “That’s how we got through the financial tsunami, if you will.”

Still, that entire year was tough for the bank, and for Ng personally, who prided himself on the bank’s profitability. The bank took a $50 million loss that year – the first unprofitable year since Ng joined East West.

“That was devastating,” said Ng, who told his board he would not accept any bonus after the subpar performance.

But as the financial crisis hit and more banks were forced to own up to their problems, East West’s quick action began to look prescient.

By comparison, East West reported a first quarter profit of about $25 million, compared with a loss of $22 million a year earlier.

For the past eight months, the bank has been reaping the rewards of its early action, completing the Nov. 6 acquisition of United Commercial, a milestone for East West.

In late 2009, the Federal Deposit Insurance Corp. contacted 51 banks requesting bids for United Commercial’s assets, should it fail. Ng took immediate action, working the phones and trying to convince investors of the benefits of such an acquisition, which offered limited downside due to FDIC loss-sharing support.

In a matter of days, East West raised $500 million.

“We raised so much capital – well in excess of what was needed,” Ng said.

Along with the overseas branches, East West also gained a valuable and rare license to do business in Chinese currency, which had been held by United Commercial. The license, which can be difficult to obtain for U.S. businesses, will give East West greater ability to penetrate the Chinese market, Ng said.

“They had a home-run deal in picking up UCB,” Balicka said. “Those kinds of deals rarely come knocking on your door.”

Once the integration of United Commercial was completed, East West executives decided to keep pushing.

The deal also pushed East West’s assets to $20.9 billion, roughly $800 million more than downtown L.A.’s City National. In Southern California, however, both banks trail the savings and loan OneWest Bank, which has $28 billion in assets.

Ng plans to continue to look for opportunities to pick up cheap assets. What’s more, East West has an agreement to open branches inside 99 Ranch Market, a popular Asian-American supermarket chain.

Not unexpectedly, the growth has presented management with new challenges. East West has had to bring in bankers from larger institutions familiar with the challenges facing large, diverse banks. It now has more than 2,000 employees spread across the globe.

“I used to know every single person’s name when we were basically a Southern California bank,” he said. “With so many different locations now, I have to be realistic that I can’t be everywhere at the same time.”

Still, Ng said he wouldn’t have done anything differently. He said the aggressive moves not only led to the bank’s growth but may have prevented its failure during the financial crisis.

“We’re never going to allow this shop to fall,” he said. “When these customers have millions of dollars in deposits at East West Bank and the FDIC only insures $250,000, I would have to kill myself if this bank is going to fail.”