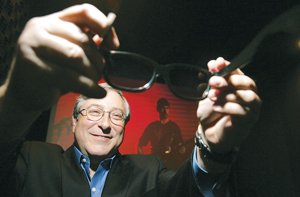 For the last three years, technicians and engineers at 3ality Digital LLC were developing gear that production companies would need to do live television broadcasts in 3-D.

But the demand for their hardware and software didn’t exist yet – there were just a handful of 3-D televisions in American households, and no 3-D channels.

Earlier this month at the Consumer Electronics Show in Las Vegas, a slew of major electronics manufacturers announced they would roll out 3-D TV sets as early as this spring. Meanwhile, ESPN, DirecTV and Discovery Communications Inc. unveiled plans to launch channels showing 3-D programs.

The surge of interest is a powerful boost for Burbank-based 3ality, which sits in a nondescript warehouse a stone’s throw from the Golden State (5) Freeway. For years the company positioned itself as a leader in a market that essentially didn’t yet exist: It designed and built camera mounts – which hold and synchronize the two cameras needed to shoot in 3-D – as well as production equipment and software for editing and broadcasting 3-D TV. All that time, however, there were few people filming programs in the format and even fewer people watching them.

As anticipation for in-home 3-D builds, 3ality’s phones started lighting up with inquiries from broadcasters around the world. Two weeks ago, 3ality announced a deal with BskyB, one of the leading entertainment companies in the United Kingdom, which will put 3ality’s technology behind a 3-D TV service in the United Kingdom and Ireland. More deals with major companies in North America and Asia could be on the horizon.

“This is the next big thing for TV, and companies that are ready right now have an advantage,” Patel said. “I think there is a potential of substantial growth in the next two to three years.”

For Sandy Climan, 3ality’s chief executive, it means his company will take on a higher profile in the broadcast industry.

“For them to really bring 3-D into people’s homes, they need us,” he said.

A closely held private company with one investor – the Modell family, which owned the Cleveland Browns football team that moved to Baltimore – 3ality does not disclose revenue. Climan said its growth has been exponential and that the company would hit profitability this year.

It helps that 3ality appears to have few competitors. The company claims to be the lone provider of sophisticated production equipment that can capture and transmit 3-D TV broadcasts. Analysts said they weren’t aware of any others, but point out it’s still a nascent market.

But 3ality’s long-term fortunes may ultimately be tied to the health of the 3-D TV market. Although the market is primed for takeoff, there are still questions about how high it will fly.

Virtually everyone agrees that sales of 3-D sets will increase as more models come on the market. Patel projected that around 1 million 3-D sets will be sold in North America this year, and possibly as many as 2.5 million to 3 million units by 2013. That increase in sales will be accompanied by a surge in 3-D programs.

But there will be some significant barriers to getting 3-D television sets off store shelves. One is the price: Patel said a 3-D TV could cost $500 to $1,500 more than a similarly sized 2-D TV. Plus, the special glasses that viewers need to watch programming in the format could cost up to several hundred dollars each.

Then there’s the question of how many shows consumers actually want to watch in 3-D. While football games might be popular, viewers may prefer to watch talk shows and sitcoms in old-fashioned 2-D, said Kurt Scherf, vice president and principal analyst at Parks Associates in Dallas.

“There’s a point where people might stop seeing 3-D as interesting and start seeing it as annoying,” Scherf said.

Climan agreed that some types of programs may be better suited to 3-D than others. Right now, 3ality is focused on filming sports and concerts, which draw large audiences.

Nevertheless, Climan foresees a day when everyday programming could be shot and broadcast in 3-D.

The firm has been perfecting technology in order to help production companies make a seamless transition from 2-D to 3-D. The company claims it takes only an hour to retrofit the equipment in a broadcast truck for 3-D. When the producers of the TV series “Chuck” shot an episode with 3ality equipment last year, it required just two more cameras. The shoot went off without any additional production days.

At the moment, it costs about 5 percent to 20 percent more to shoot a 2-D TV show in 3-D. Climan said 3ality hopes to close that gap to make 3D shooting more attractive to producers.

In 3ality’s Burbank warehouse, a pair of technicians worked on a half-dozen camera rigs, installing cameras and tightening screws. As the pace of business has increased, Climan said he’s lost track of how many rigs 3ality has built.

“Honestly, we’re selling them as fast as we can make them,” he said.