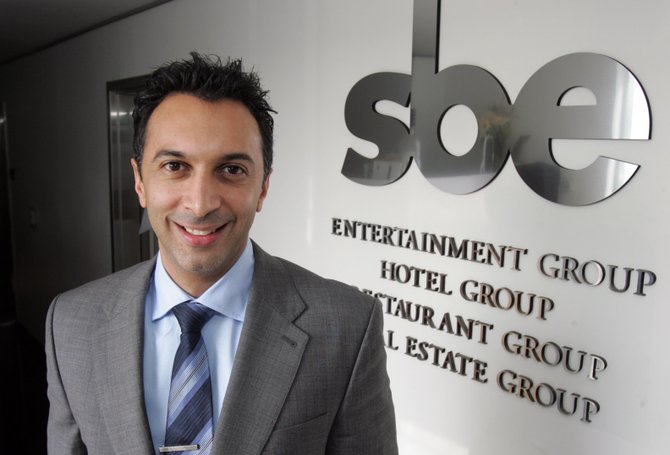 SBE’s Behzad Souferian at the firm’s office near the Fairfax District. Photo by Ringo Chiu.

SBE Entertainment Group, known for turning hotels, nightclubs and restaurants into hot spots frequented by the rich and famous, was hit hard by the recession. But now it’s getting ready for the rebound.

The company, founded by nightclub owner-turned-hospitality entrepreneur Sam Nazarian, has been hiring at its corporate headquarters and is in expansion mode.

Among the new ventures, SBE is leveraging its expertise in real estate and hospitality into a consulting business called SBE Reserve, and it is expanding its residential real estate activities.

“We see that the market has turned,” said Behzad Souferian, vice president of real estate at SBE. “There’s more light at the end of this tunnel, and we are at the growth phase again.”

SBE isn’t alone in positioning for the recovery.

One of SBE’s primary initiatives is to provide property owners with an array of real estate and hospitality services. For example, if a property owner or investor wants to build a hotel, he can hire SBE Reserve to handle the development, including finding an architect and interior designer, managing the construction, and even marketing and managing the property.

Baltin said that while it’s not unusual for a company that began developing its own properties to start a consultancy similar to SBE Reserve, most don’t offer such a broad range of services.

“It’s a way for a company to leverage its expertise without having to invest a lot of capital in one project,” Baltin said.

The launch of SBE Reserve follows a slump the company hit during the economic downturn. SBE, headquartered on Beverly Boulevard near the Fairfax District, canceled plans to build a 1,000-room tower at its Sahara Hotel and Casino in Las Vegas; trimmed its corporate staff by about half, laying off about 50; and ran into delays on the multimillion-dollar renovation of its Ritz Plaza Hotel in south Miami Beach last year.

But it was a brutal period for the hospital industry nationwide.

Revenue per available room, a key measure of room rate and occupancy growth, dropped 17 percent from 2008 to 2009 nationally, according to Smith Travel Research.

“It’s been a top-down recovery that’s been led by the luxury segment,” Baltin said. “But of course that segment was hurt the worst.”

Anticipating a recovery, Nazarian has been hunting for properties in New York, Chicago and London, while SBE’s presence in Los Angeles has grown this year to include a new nightclub, the Colony in Hollywood, and a luxury boutique hotel, Redbury @ Hollywood and Vine. What’s more, Souferian said the company has been adding to its corporate staff during the previous six months.

With SBE Reserve, the company is taking advantage of experience developing such popular destinations as nightspot Hyde Lounge and luxury hotel SLS Hotel at Beverly Hills.

SBE has also had a hand in residential real estate investing, although its activity in that area has been pretty low profile. The plan now is to boost that.

Souferian and Nazarian were childhood friends and worked together even before the launch of SBE in 2002. Together, they built the venture into a hospitality firm that develops and manages nightclubs, restaurants and hotels.

Souferian said the idea for SBE Reserve emerged during the downturn as company clients and associates informally asked executives how to find a real estate attorney or a lender, for example.

“We were getting calls for advice and consulting on what they should do,” Souferian said. “Whether it was repositioning debt on one of their assets, or if they were thinking of doing a renovation, if it was the right time to do it.”

So SBE decided to create a division where the company could offer its consulting and advisory services in a formal manner to property owners throughout the United States.

The firm’s residential activity until now has included investments in apartment buildings in Southern California, Florida and Illinois. SBE Reserve’s first move is the redesign of a 6,300-square-foot mansion above the Sunset Strip where homes sell for $15 million to $20 million. The company is planning to list the house, which has three bedrooms and six baths, within the next 30 days.

SBE handled the renovation, including obtaining the proper entitlements, and hiring a designer and general contractor. The buyer of the house will get not only panoramic views, but access to SBE’s global concierge service, including VIP treatment at the company’s establishments.

Meanwhile, a separate aspect of the SBE Reserve umbrella is focused on providing services to a wide range of real estate owners, including people who own a single-family residence worth at least $2 million; companies with a portfolio of multifamily residences; and owners of office, commercial, retail or hotel properties.

Souferian declined to comment on how much the company will charge for its services, but acknowledged that there are challenges in turning SBE Reserve into a success.

“Our challenges are going to be picking the appropriate assets where we can really maximize the value for whoever the property owner is,” Souferian said.

But hospitality industry analysts familiar with SBE said the company’s likely to find a hit with SBE Reserve.