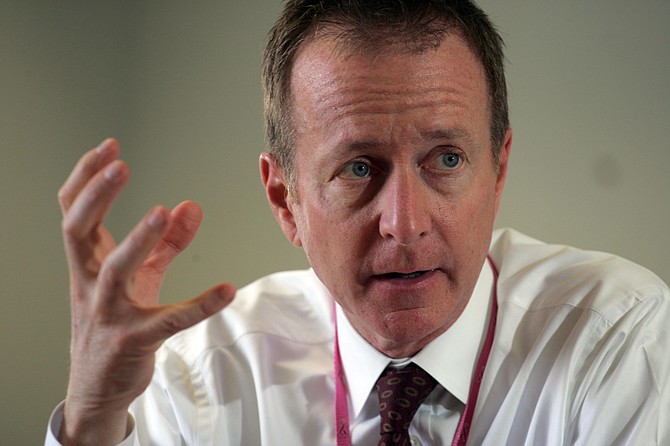 When Los Angeles Deputy Mayor Austin Beutner this summer jettisoned the so-called 12-to-two plan to streamline the building permit process, he told developers not to worry: He’d be even more ambitious about cutting the city’s notorious red tape.

Beutner last week told the Business Journal that the centerpiece of that bigger reform is called simultaneous processing. Instead of a permit going through the departments one after another, he wants each permit to be processed at the same time by all departments. That way, they can coordinate a response to any snags or problems.

Beutner said simultaneous processing could cut the permit approval time for most projects by more than half, from more than two years to a year or less in many cases.

“The key is to get people in different city departments to focus on the same project at the same time,” he said.

Mayor Antonio Villaraigosa had long promised cutting the number of approvals a developer needed from city departments from 12 to two. But that effort stalled amid bureaucratic resistance. Beutner, a former investment banker whose full title is now first deputy major and chief executive for economic and business policy, quietly scrapped the plan to pursue what he said would be more sweeping reforms.

Besides simultaneous processing, the more ambitious plan calls for a website that allows developers to track their projects, and expanding a successful “express permitting” program for restaurants and some other types of businesses.

He has already hired a consultant to make recommendations based on the development processes in other cities.

The proposal drew praise from some circles, skepticism from others.

“Simultaneous processing is the best and quickest fix for development reform,” said Carol Schatz, chief executive of the Central City Association, which lobbies for business interests and has several developers on its board.

But some developer advocates, who note that projects can take twice as long to build in Los Angeles than they would in other cities, say projects will still face excessive hurdles because of L.A.’s lengthy environmental review processes; complex zoning code; and inadequate City Hall staffing, especially in the Planning Department.

“On a complex project, it can take a year or more just to complete an environmental impact report,” said Dale Goldsmith, partner in the West L.A. law firm Armbruster Goldsmith & Delvac LLC, which specializes in land-use entitlements. “Better interdepartmental coordination, while good on its own merits, won’t help on this front.”

He said that Beutner’s proposal to track projects through a single web site would also make little difference. “I know exactly where my projects are. Checking up on them isn’t the issue. Getting the projects moving is.”

Goldsmith and other developer advocates say what’s really needed are firm deadlines for approvals to be granted (or denied so appeals can go forward or businesses can cut their losses), more staff at the city’s Planning Department and simplification of the city’s Byzantine zoning code.

“Unless you have these components, projects will continue to get stuck in the pipeline,” he said.

Beutner said there ought to be guaranteed time frames for project approvals, but so far that is not part of his reform plan.

One key problem in getting projects through is vague zoning language that leads to conflicting interpretations of code requirements, both within and between city departments. A frequent example is the distance required for setbacks of structures from the street: Building and Safety might require one distance, while Transportation might have a different requirement to allow for future street-widening. Resolving these conflicts can take months.

Beutner said his proposal for simultaneous permit processing can address some of these conflicts through better coordination of City Hall departments.

“It would provide the opportunity for a faster resolution of such a conflict, certainly faster than what we have today,” he said.

But Reznik, a partner with Century City law firm Jeffer Mangels Butler & Mitchell LLP, said what’s lacking in the Beutner proposal is incentives to encourage bureaucrats to process permits more quickly, even under a simultaneous processing system. Having a single website to track projects could help, if it also tracked the time it was taking for projects to go through each agency.

“This would put pressure on departments to move things quicker,” he said.

Beutner said the implementation of the site remains a year or two off, as it would require up to $500,000 in technology upgrades.

Meanwhile, the Planning Department has begun to simplify the zoning code by clarifying vague language and consolidating requirements for approvals of development projects. But some local homeowner activists have mounted an opposition campaign, saying the code changes would gut the zoning code and favors developers who want to build high-density projects that would transform neighborhoods and add traffic, turning Los Angeles into Manhattan.

The city has also hired Century City-based KH Consulting Inc. and Dayton, Ohio-based Woolpert Inc. to examine permitting practices in other large cities and come up with additional recommendations.

In addition, Beutner said he is considering expanding the city’s restaurant express permit program to other industries. The program was set up in the spring to deal with complaints from entrepreneurs that it was taking two years or more to get permits to open a restaurant. In the case of one restaurateur, Jill Bigelow, the process took so long that she opened her Provecho Mexican restaurant in downtown in the midst of the recession and had to close down a year later because she missed the chance to build the business.

The restaurant express program puts the Department of Building & Safety in charge of expediting permit approvals from as many as 15 different agencies, with a goal of getting all approvals within six to nine months.

The program has been widely hailed by the business community.

“It has cut the processing time in half,” the Central City Association’s Schatz said. “It’s been very successful and there’s no reason why this can’t work for a major development project.”