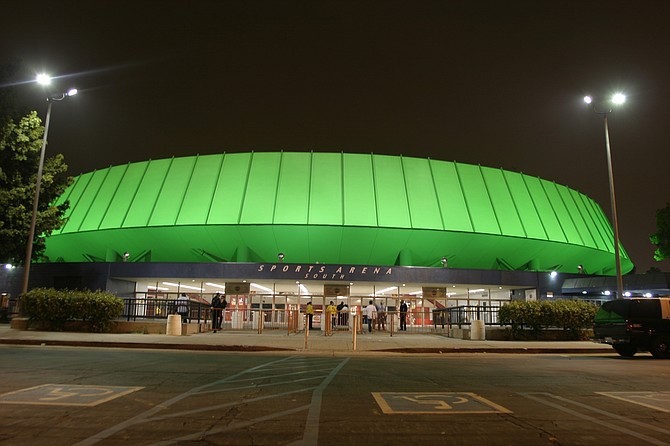 Annual losses approaching $1 million are what’s behind the plan to tear down the aging Sports Arena and possibly replace it with a Major League Soccer stadium or some other venue.

The 51-year-old arena, once the home of the Lakers and Clippers, has been eclipsed in recent years by new facilities and is on track to host just 70 events this year – less than one-third of the number at the Staples Center.

Now, the Los Angeles Memorial Coliseum Commission is considering razing the arena and replacing it with a 22,000-seat stadium for Chivas USA, which plays at the Home Depot Center in Carson. Other possibilities include an amphitheater.

“We don’t have a deal or even hard negotiations under way for the space, but we wanted to start the process because we know that we will ultimately have to go through it,” said Pat Lynch, general manager of the commission, a joint authority that runs the Exposition Park facilities.

The commission ordered a draft environment impact report to be conducted on the arena and what else could be done with the site. The report found that the aging facility will need $8.2 million in plumbing, air conditioning and other building improvements in the next five years in order to remain operative – money the commission would rather spend on a new facility.

The arena not only competes against the larger Staples Center but with the Nokia Theatre at L.A. Live and USC’s Galen Center, all of which have opened over the past decade. That has left the Sports Arena to host lower-tier events.

Lynch said that he sought feedback from nearby institutions such as USC and the California Science Center and the comments were similar.

“Everybody says the same thing: ‘Let’s move on from the Sports Arena,’” he said.

There are some limitations as to what can be done with the Sports Arena’s land, according to the master plan for Exposition Park. The land can’t be developed into retail, office space or something such as housing for USC students.

Jon Lee, a spokesman for the commission, said that a development last week – news that USC was in negotiations to buy the land underneath the Sports Arena and Coliseum – would not affect what happens to the arena site. The university reportedly wants to control the land to gain use of the parking lots and to ensure that the area is properly maintained.

This month’s announcement that the 2022 World Cup would go to the Arabian Peninsula country of Qatar wasn’t exactly good news for AEG.

The sports and entertainment company has generated big buzz with talk of plans to build a stadium next to its L.A. Live complex in downtown if it can get a National Football League team. One argument in support of the proposal, which could require public funds, was the idea that the stadium could be used to host the World Cup final.

Now, the soccer tournament has gone away, but AEG Chief Executive Tim Leiweke told a packed house at a Central City Association lunch last week that it wasn’t a big deal.

“We can still host a Final Four and the Super Bowl,” Leiweke told the crowd of about 350, reiterating that AEG plans to move forward aggressively with its proposal.

He noted that the company has received preliminary stadium designs from 12 architects. Three will be chosen for further review before settling on a final design and starting the entitlement process in January.

The National Basketball Association’s All-Star Game has quite a following.

In fact, with the game set for Feb. 20 at Staples Center, the Los Angeles Sports and Entertainment Commission has been tasked with recruiting 2,000 volunteers to help staff the game and its peripheral events such as the Saturday Night All-Star Jam Session.

“I was amazed at how quickly we collected names. Everybody else will go on a wait list,” said commission President Kathy Schloessman, who said she has fond memories of the last time the NBA All-Star Game was in Los Angeles in 2004.

“It was the biggest event I’ve seen in my life,” she said.