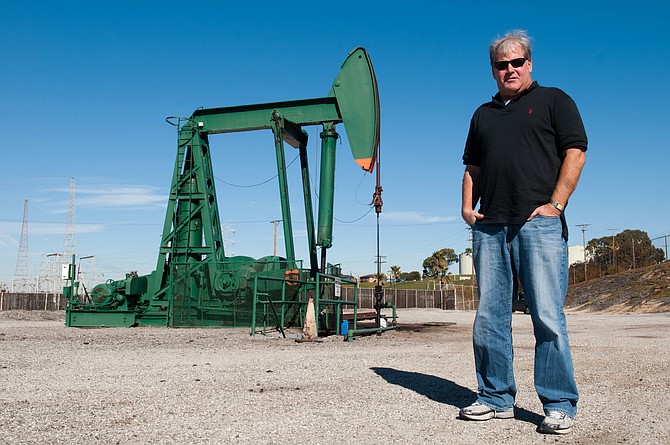 The Cooper & Brain Oil Co. was founded 80 years ago in Wilmington and has ridden out the booms and busts since. Today, the grandchildren of the founders have dozens of wells in Los Angeles, which pump more than half of the company’s total production.

But they say their legacy could be threatened if L.A. voters in March approve a ballot measure to impose a $1.44 tax on each barrel of oil taken out of the ground in the city.

The city says the tax would raise as much as $4 million a year to help plug its massive budget hole. However, the tax would also make it more expensive to get oil out of the ground, and that could force some painful decisions for the eight-employee company that produces about 320 barrels a day.

Jeff Cooper, the company’s vice president and grandson of founder Joe Cooper, said the tax would cost his company nearly $100,000 a year.

“If oil prices went down, this tax would force us to close down wells in Los Angeles much sooner than would otherwise be necessary,” he said.

Cooper & Brain is one of dozens of mostly family-run small oil operations that dominate oil production in the city and stand to be hit the hardest by an extraction tax.

Most of the major oil companies such as Unocal or Chevron long ago sold their L.A. oil producing properties and moved on. Even Occidental Petroleum, the largest oil company headquartered in the city, has “negligible” production within city limits, according to a company spokesman. The major oil companies’ biggest presence within the city is in the form of refineries, which would not be subject to the tax.

As a result, the Western States Petroleum Association, which represents the major oil companies, is neutral on the L.A. extraction tax.

The only association member that has significant operations in the city, Houston-based Plains Exploration and Production Co., declined to comment for this story.

But some smaller independent producers are vigorously opposed to the proposed extraction tax, which at $1.44 per barrel is more than twice as high as any nearby city. Long Beach has a 40-cent-per-barrel tax, Signal Hill 60 cents and Seal Beach 58 cents.

The smaller companies say the tax could force them to cap low-margin wells in the city. That in turn, could take jobs and money away from dozens of oil field contractors, from drilling rig operators to maintenance crews.

“In Los Angeles, with so many old wells, you need continual investment and upgrades to maintain production levels,” said Hal Washburn, chief executive of downtown L.A.-based Breitburn Energy Partners LP, which has operations scattered throughout the city.

“This tax would put a stop to much of that as the investment would flow to wells that don’t have such a high tax,” he continued. “If the investments are not made, then that’s where you see the real impact on jobs.”

That prospect has drawn the attention of local business groups, including the Los Angeles Area Chamber of Commerce.

“Hundreds of small businesses are dependent on the local oil industry and are struggling to hold on to their workers,” said chamber Chief Executive Gary Toebben. “The city should not be singling out this industry or any other industry for more taxes.”

Toebben, who headed chambers in the Midwest before arriving in Los Angeles four years ago, said he witnessed firsthand the economic devastation wrought by the oil bust of the 1980s.

“Thousands of wells were capped and hundreds of thousands of people were out of work,” he said. “We should not be doing anything to increase the chances of that happening here.”

Supporters of the extraction tax, especially elected officials in cash-strapped Los Angeles, say they’ve heard similar complaints before from industries targeted by taxes, only to see the vast majority of companies in those industries remain.

“Every time we hear the same thing: Businesses are going to close and leave the city,” said Councilman Bernard Parks, who voted along with the council majority last month to place the tax on the March ballot. “But companies are not going to put themselves out of business. They adapt.”

Parks said that new revenue was necessary to help the city get out of its financial jam.

“We’re not going to get a strong recovery that will help balance the budget and we’ve already cut city services significantly,” he said. “Now, we need to look at new revenue.”

During the past two years, Parks said that the council had considered an oil severance tax at a rate comparable with surrounding cities. But when officials found that the tax would generate less than $1 million a year, the plan was scrapped.

“You couldn’t sell that level of revenue to voters and say it would boost city services,” Parks said.

Another factor was the failure of a statewide proposition in 2006 that would have imposed a 6 percent tax on oil extracted in California to fund alternative energy projects. Even with wealthy Hollywood producer Stephen Bing putting up more than $40 million, the measure went down to defeat after a furious campaign by the oil industry.

Councilwoman Janice Hahn proposed the L.A. extraction tax in February However, when the council considered the severance tax last month, Hahn cast the lone vote against placing the tax on the March ballot. She said she had concluded that the oil industry would defeat the proposal so it would be a pointless exercise.

So far, however, the strongest opposition has come from smaller independent oil producers.

“We fully expect some marginal wells to close in Los Angeles because of this tax, which will mean less jobs and a further reduction in the supply of domestic oil,” said Rock Zierman, chief executive of the California Independent Petroleum Association.

Zierman said the tax would reduce oil production in the city and that as a result, Los Angeles would take in substantially less than the $4 million a year it currently projects.

What’s more, he said, the tax is a fixed amount for each barrel produced rather than a percentage. That means the tax takes a bigger bite if prices decline.

Breitburn’s Washburn noted that two years ago, oil plummeted to $35 per barrel on the open market.

“It costs us $30 per barrel just to get oil out of the ground in Los Angeles, and that’s before any mineral royalties are considered. If oil prices get down to $35 or $40 per barrel again and we have this tax, all the wells in Los Angeles would be losing money.”