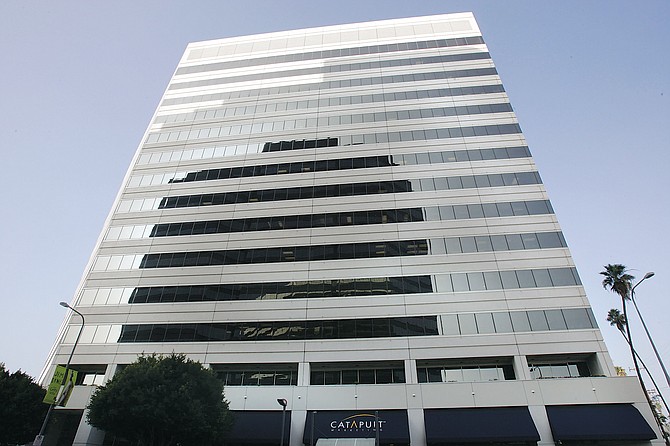 Los Angeles County’s biggest office sale of the year is finally moving forward after being held up for months by the bankruptcies of businessman Ezri Namvar and his real estate company.

Last week, a U.S. Bankruptcy Court judge approved the $111 million sale of Wilshire Bundy Plaza, a 307,000-square-foot West L.A. building, to Douglas Emmett Inc. The deal is expected to close in about a month.

The sale of the 12121 Wilshire Blvd. building to the Santa Monica real estate investment trust would be the biggest since MPG Office Trust Inc. sold its Lantana entertainment campus in Santa Monica last year for about $200 million.

The sale of Wilshire Bundy took longer than many expected. Douglas Emmett emerged victorious at a May 11 auction conducted by the trustees, but Judge Barry Russell the next day denied the trustees’ request for approval.

The sale was opposed by many creditors of Namco and Namvar, 58, whose investment business collapsed in 2008 amid the economic downturn. Namvar has been accused of operating a Ponzi scheme once his ventures soured and has been under FBI investigation. At least $866 million is owed to 464 creditors, according to court filings and other documents, though final tallies could be lower.

The collapse wiped out investments from hundreds of Persian Jews in the Beverly Hills area, a group of whom wanted to delay the Wilshire Bundy sale until the market improved.

Namvar’s standing in L.A.’s sizable Persian Jewish community and his personal solicitation of investments have made the matter stand out, even though it is a fraction of the size of some similar cases, such as those involving Bernard Madoff or Texas billionaire R. Allen Stanford. It is unclear how much creditors will be paid back because the official tally of claims has not been completed and not all of the assets have been sold.

The sale of Wilshire Bundy wasn’t the only development in the bankruptcies last week. Sharp said that he and Namvar’s personal bankruptcy trustee, R. Todd Neilson, are working on a reorganization plan for both bankruptcies and hope to file it in court by year’s end. The plan would outline a strategy for dealing with the remaining assets of the two estates and distribution of payments to creditors.

Many of the creditors fought the sale of the West L.A. property in court. However, it was the opposition by Namvar’s four brothers, who also had interests in Wilshire Bundy, that held up the transaction. Three of the brothers relaxed their opposition at the Aug. 23 bench trial, but one brother, Mousa Namvar, continued to oppose the sale on the grounds that the building should not be sold until the real estate market improves.

Mousa Namvar said in an e-mail interview that he was disappointed the building was sold “at the bottom of the market,” adding that he believed that even in today’s market the property could have fetched a higher price.

He said his position was in line with what most creditors believe. “Much of our opposition was to give a voice to the creditors in these proceedings.”

Ultimately, Russell approved the deal, which has languished in escrow. His order approving the sale was not immediately available.

“(Judge Russell) delayed it to give them time to raise factual issues to support their position that they would be damaged by the sale,” Sharp said.

The property is one of the most valuable in the Namvar portfolio and creditors could receive as much as $40 million once mortgage debts are paid, minus any money owed to the brothers.

Both Mousa Namvar’s attorney, Brian Davidoff, and Christopher Reeder – the attorney representing the three other brothers, Sean, Tony and Ramin Namvar – said all four had a joint concern of how proceeds would be disbursed.

The building and its underlying one-acre lot are owned by 15 limited liability companies through a complex structure. Ezri Namvar has a majority interest and the brothers are owners through various entities. Sharp said that the disbursement plan would be discussed with the brothers and their attorneys, though it’s unclear when those meetings would occur.

Bob Safai of Madison Partners, who represented the Ezri Namvar and Namco estates in the sale, believes the deal will set a benchmark for office building transactions in West Los Angeles.

“It should help solidify values and (the) continued appetite for Westside Class A real estate,” he said in an e-mail interview.

While the official committee of Namvar creditors supported the sale, a large group of creditors did not. They’ve long considered Wilshire Bundy the crown jewel of the Namvar portfolio, which once included hundreds of properties. The portfolio was valued by Namvar as high as $2.43 billion in 2008.

The building, which is 84 percent occupied, formerly housed the headquarters of Namco and Security Pacific Bank, which Namvar operated until it was declared insolvent and closed by regulators in 2008.

George Haroonian, leader of the group of creditors who opposed the sale, said that the creditors were not able to capitalize on the momentum generated from their initial opposition. He admitted there had been infighting, with some focused on getting criminal charges brought by federal authorities against Namvar, while others were pursuing a tack of removing Namvar and Namco from bankruptcy court and having repayments handled under an informal plan controlled by creditors.

“I don’t think our side has been able to fight this issue,” Haroonian said. “I think the unity that we brought among the creditors with the declarations that we signed was not utilized.”

The Aug. 23 decision on Wilshire Bundy kicked off a flurry of activity in the rancorous bankruptcies. The other developments centered on the unwinding of transactions – such as sales of assets or transfers of ownership interests – made by Namvar and Namco that are believed to have violated bankruptcy law. Certain transactions made up to a year prior to bankruptcy can be unwound by a court if the deals are considered preferential or with so-called insiders such as family members.

A handful of those transactions were settled last week, Sharp said, but one deal is proving contentious. Neilson is seeking to have the judge order the unwinding of an alleged transfer by Namvar of his 20 percent interest in an Israeli entity to his brother Sean Namvar within days of bankruptcy. The entity in question, called Nam 5 Ltd., counts a yet-to-be-opened luxury condo tower in Tel Aviv as its main asset.

Reeder, the brother’s attorney, declined to discuss the matter in detail, except to say: “Sean has been very open with providing them with information about it.”

Now, with the sale of Wilshire Bundy nearly complete, the filing of the reorganization plan will be the next milestone in the case. It could be approved as soon as the first quarter of 2011.