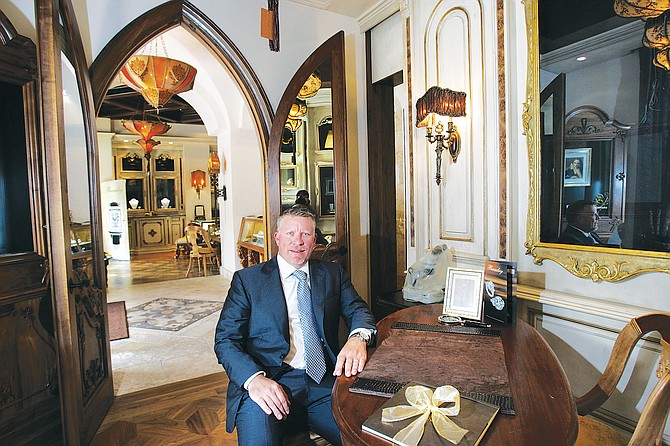 Michael Beaudry at his shop in the Montage hotel in Beverly Hills. Photo by Ringo Chiu.

On top of a cabinet behind Michael Beaudry’s desk is a string of large white pearls that he’s turning into a customized bracelet. He expects to sell it for $400,000.

It’s just another day at the office for Beaudry, who has designed multimillion-dollar rings, necklaces, watches, bracelets and more for some of the biggest names in the world, including Barbra Streisand and Warren Buffett.

As chief executive of Centerstone Diamonds Inc. and five affiliated companies, Beaudry, who started as a diamond cutter at 18, has built a small jewelry empire out of a nondescript office building in downtown Los Angeles. It’s one of the only jewelry businesses that manufactures almost entirely in Los Angeles. In addition to making collector pieces, Beaudry has lines that retail in department stores, and he opened his own shop at a Beverly Hills hotel two years ago.

That was about the time his empire almost came crashing down.

Beaudry’s sales dropped off a cliff after the financial crisis, forcing him to lay off some of his workers and turn others into contractors. At the same time, a factoring company demanded control of his inventory.

To address the falling sales, he introduced lower-cost jewelry – all the way down to $400, in some cases. To avoid losing his jewelry to the factoring company, he filed a strategic Chapter 11 for two of his companies.

Today, sales are building, the companies are preparing to emerge from the reorganization and the storm appears to have calmed.

“We were having challenges,” the 44-year-old Beaudry acknowledged. “Now we’re seeing demand pick back up.”

While high-end jewelry companies have struggled during the recession, analysts said Beaudry’s efforts to adapt to the changing marketplace showed impressive survival skills.

Now, the company is poised to cash in on the rebound. Based on projections from the first half of the year, U.S. jewelry companies are on track for record sales of $63 billion this year – up more than 2 percent from 2007, the previous record high – surprising even longtime industry watchers.

“I had no idea that jewelry sales would come back so quickly,” said analyst Ken Gassman. “I am surprised.”

Beaudry’s interest in jewelry was piqued as a 7-year-old when he spent time in his uncle’s diamond-cutting studio. Fascinated by the process, Beaudry enrolled in the American School of Diamond Cutting in Whittier when he turned 18.

To help pay his way, he started cutting diamonds for other jewelers. Soon he realized that he could make a living buying rough or poorly cut diamonds on the cheap, recutting and then selling them for a profit.

“It was sort of like developing real estate, except with diamonds,” he said.

He started traveling periodically to Israel to buy uncut diamonds. One day, he realized he had a career on his hands.

“My hobby had become my full-time job,” he said.

A few years after launching his business, he began advertising in luxury car magazines, which led to calls from across the country. He partnered with high-end retail stores and brands such as Rolls-Royce to find new customers. Through referrals, his reputation grew, leading executives, celebrities and other rich folks to call him up.

What sets Beaudry’s jewelry apart, he said, is that all of the design, cutting and general craftwork is done by hand on site, and can be custom-made for practically any customer. These days, Beaudry spends less time designing pieces himself, but he consults with staff and signs off on every design.

In 2005, he bought a five-story office building on the edge of the Jewelry District in downtown. The property, once owned by Union Bank, has a vault in the basement where most of the jewelry is stored.

Before the financial crisis, Beaudry said that his company was making more than 1,000 couture pieces per year, including many “masterpiece projects” – custom pieces that sold for more than $4 million. Revenue, he said, was “in eight figures.” He started a watch-making division, though jewelry still accounts for about 90 percent of his sales. His staff grew to 75.

The jewelry lines are sold under the Michael Beaudry brand at high-end retailers such as Neiman Marcus. In November 2008, Beaudry opened his own retail location inside the swanky Montage Beverly Hills hotel.

As the Montage store was opening, though, Wall Street was falling apart. Many of Beaudry’s best customers – stockbrokers and other financial professionals on the East Coast – just stopped calling. His sales dropped by more than one-quarter.

So some workers lost their jobs and about two dozen of the craftsmen were converted from full-time employees to contractors who work by the piece.

At the same time, Centerstone and Michael Beaudry Inc. had a complex factoring arrangement that began to go sour with an asset-based lender in Boca Raton, Fla., called First Capital.

First Capital, which had begun to pull back from the luxury goods sector during the recession, adjusted the fee structure with Beaudry’s two businesses. The new structure was too expensive for Beaudry, and he couldn’t service $6.5 million that was still outstanding.

First Capital, which could not be reached for comment, filed a motion to take control of the inventory of the two companies, and Beaudry filed for Chapter 11 protection in response.

A reorganization plan, which would allow Beaudry to retain control of his inventory, has been approved by the bankruptcy court, Beaudry said. The companies should emerge by the fall and not look much different than they did prior to the recession, just smaller.

Filing for bankruptcy was an unusual – but savvy – move for the company, observers said.

Amanda Gizzi, director of communication for industry trade group Jewelers of America, said few jewelry companies filed for bankruptcy during the recession, opting instead to simply go out of business. The companies that made it through the period, she noted, did so by smartly adapting to the changing circumstances.

One of the key elements of the business’s turnaround was the introduction of lower-cost jewelry lines. Just before the economy took a nosedive, Beaudry introduced his more affordable Beautique Collection. This May, the company unveiled a line designed by his wife, Laura, with some pieces expected to sell for less than $1,000.

“We’re addressing our customers with different price points,” Beaudry said. “At first, our dealer network thought that we were maybe cannibalizing or watering down our brand. But it’s actually been a great addition for us.”

GOAL: To expand the Beaudry brand and become one of the top designers of high-end jewelry.

THE NUMBERS: Revenue has declined by nearly 30 percent from pre-recession high.