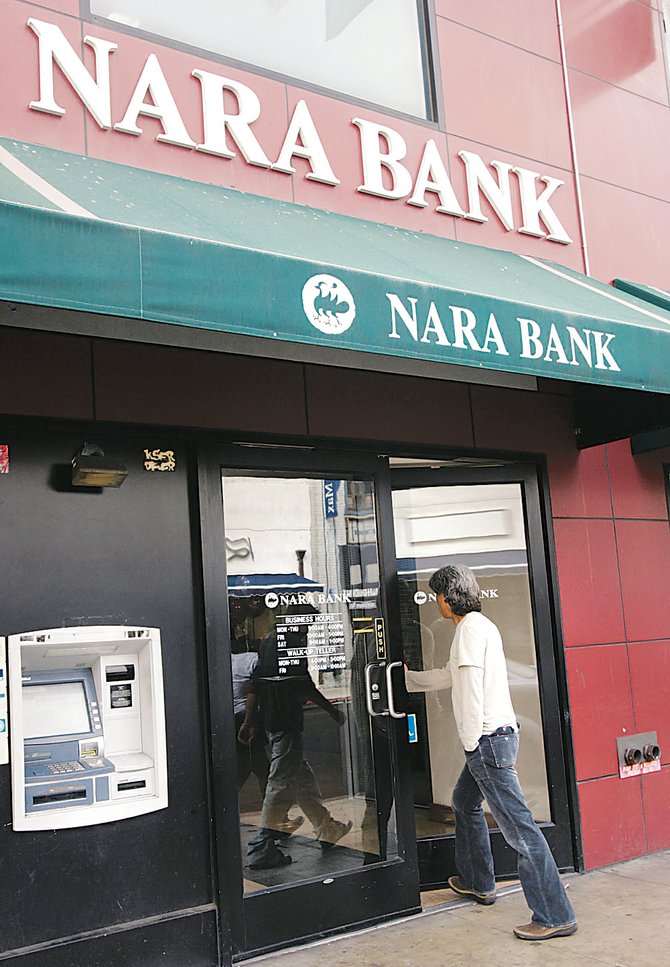 With signs of recovery emerging in the banking sector, a growing number of local banks are undertaking aggressive efforts to clean up their spotty loan portfolios by disposing of problem assets.

An analysis of recent bank earnings reports reveals that several local institutions, including Koreatown’s Hanmi Financial Corp. and Wilshire Bancorp Inc., managed to sell tens of millions of dollars worth of distressed loans during the second quarter.

Analysts said community banks with high concentrations of commercial real estate loans, such as the Korean-American institutions, are finding a growing market for distressed assets where the banks can command decent prices for the loans.

“It’s gotten to be a wider market,” said Joseph Gladue, an analyst with West L.A.-based B. Riley & Co. “A lot of banks are becoming more aggressive in getting rid of these problem assets.”

Hanmi sold $82.1 million in delinquent and nonperforming loans during the quarter; Wilshire sold $48 million. Meanwhile, Nara Bancorp Inc., the Koreatown parent of Nara Bank, said it is in the process of selling $63.3 million.

Unloading distressed assets at a discount forces banks to realize a loss, but Gladue said the institutions are generally wise to sell the loans because it will ultimately help clean up their books and relieve them of the obligation of trying to service the loans.

“It frees up capital and it does improve their ratios, and it gets rid of the cost of having to deal with them,” he said.

Selling assets is not the only step Hanmi is taking to clean up past troubles. The parent of Hanmi Bank last week completed concurrent stock and rights offerings that raised a combined $120 million.

The institution, which has been ordered by regulators to raise capital, had previously announced a $240 million investment from South Korean financial conglomerate Woori Finance Holdings Co. – a deal that is awaiting approval by U.S. regulators.

Alex Cappello, whose Cappello Capital Corp. acted as the adviser in both the offerings and the Woori deal, said it was a tall order convincing investors to put money into a bank that was rumored to be on the brink of failure.

“I’m not going to say this was easy – it definitely was not easy – but we were confident we would get it done,” he said. “We were very, very pleased with the response from the Korean community.”

The firm said it reached an agreement to acquire an investment advisory subsidiary of financial giant Deloitte LLP. Terms of the deal, which is expected to close in September, were not disclosed.

The deal increases Aspiriant’s offices from two to eight, including locations in New York and Boston, and boosts its assets under management from $4 billion to more than $7 billion.

The L.A. company received a delisting notice from the stock market in April after failing to file its annual earnings report with the Securities and Exchange Commission. Broadway executives said they were awaiting examination results from the institution’s regulator, the Office of Thrift Supervision.

Broadway, which since filed its annual and first quarter reports, received a letter July 19 confirming that it regained compliance.

A pair of wealth advisers at Morgan Stanley Smith Barney has launched a money management division within the firm targeting entertainment industry clients.

The division, based in Beverly Hills, is headed by Richard Zinman, who joined Morgan Stanley in 2008, and John Bunzel, who joined in 2009. Both have backgrounds in the entertainment industry.

“We believe that entertainment industry professionals will benefit in working with wealth advisers who have worked in their industry and understand the unique nature of their business,” the firm said in a statement.