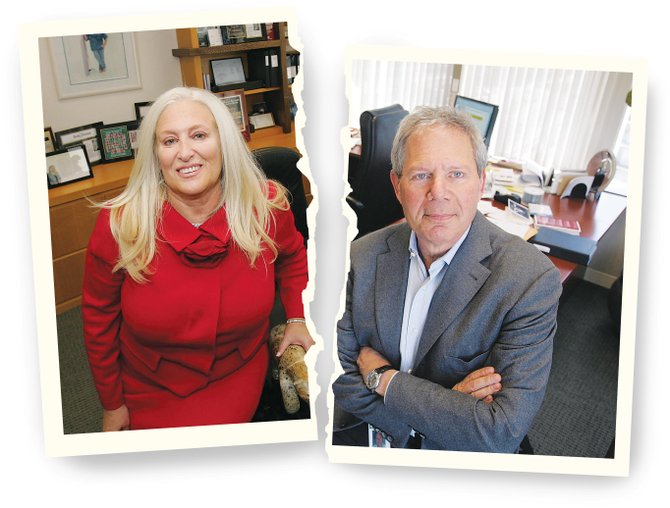 Linda Smith and Chuck Diamond in their respective offices at O'Melveny & Myers in Century City. Photo by Ringo Chiu.

O’Melveny & Myers LLP partners Linda Smith and Chuck Diamond were in the unusual position of being married while representing Advanced Micro Devices Inc. against Intel Corp. in one of the largest antitrust cases ever.

What’s even more unusual, during much of that four-year legal battle, the co-lead lawyers on the case were going through their own private battle at home: a long and bitter divorce that’s still ongoing.

But in a stark contrast to, say, the very public divorce of Jamie and Frank McCourt, the divorce of Smith, O’Melveny’s most senior female attorney, and Diamond took a back seat to the mega-litigation between AMD and Intel, which wrapped up in November.

“We both were completely committed professionally to the case,” Smith said during an interview with the Business Journal at her high-rise condo along the Wilshire Corridor. “So we channeled our litigious nature into fighting Intel. But at the same time, we were fighting over the house, had a child still at home. There were all sorts of issues with my stepkids who were out of the house but still emotionally involved. It was very trying and very frustrating, both professionally and emotionally.”

Smith, whose larger-than-life personality overshadows her 5-foot-2-inch frame, has never been one to walk away from a challenge. So when she and Diamond decided to get divorced, Smith said she was resolved to continue representing AMD. Diamond said he was as well.

While no one apparently keeps statistics on such matters, their situation certainly is rare. Some law firms don’t even allow married couples to work at the same firm.

It’s even rarer for a married couple to litigate a case together, said Alan Miles, principal of Santa Monica legal search firm Alan Miles & Associates Inc. It’s especially rare for a case as large as the dispute between AMD and Intel. So a divorce under such circumstances is virtually unheard of.

But Miles said Smith and Diamond are the go-to lawyers at O’Melveny for such complex matters, and therefore the firm and client likely wanted both of them on the case.

“You are talking about two star litigators at O’Melveny and I can understand for the AMD-Intel case that they wanted their best litigators on the case,” Miles said. “And, unfortunately, their two best litigators are Linda Smith and Chuck Diamond.”

An O’Melveny spokeswoman said the firm doesn’t have a policy barring married lawyers. But she said that “our guiding principle is that everyone does their best work to ensure that client needs are met and the interest of our clients is being protected.”

Smith and Diamond, who both work in the Century City office, became involved in the AMD case through Thomas McCoy, AMD’s executive vice president of legal, corporate and public affairs who is also a former O’Melveny partner and friend of Smith and Diamond.

In a statement to the Business Journal, McCoy said O’Melveny put together “a Hall of Fame team of trial lawyers” to handle the case.

He declined to discuss the couple’s divorce, but said: “They each distinguished themselves in one of the toughest, most important cases one could imagine.”

Diamond said McCoy was understanding and supportive of the situation.

“We were not going to get involved in any bitterness that would affect our client, colleagues or the cause,” Diamond said. “And we gave Tom that assurance, and he was happy to have us proceed.”

Smith joined O’Melveny in 1977, and as a young associate worked with the firm’s top litigators on complex business cases. She quickly made a name for herself as a tough-as-nails business litigator.

“I’ve never not wanted to do what I do,” Smith said. “I only do large, complex and challenging litigation, which involves lots of travel, work, time and large teams. I wouldn’t have it any other way.”

Smith and Diamond were already practicing at O’Melveny when the two became romantically involved.

They were married in 1983 by a Los Angeles Superior Court judge. Smith said the couple’s friends were upset about the courthouse nuptials, and so they then hosted a lavish wedding that included a 150-person sit-down dinner aboard a yacht at Marina del Rey.

“Christopher came, so it was like having the papal blessing,” Smith said.

Smith then became a partner at O’Melveny in 1984, and she joked that the only thing that worked against her bid for partnership was her relationship with Diamond.

Even though both practiced in O’Melveny’s litigation department, Smith and Diamond kept their distance when it came to litigating cases.

“She moved into the financial services area and I didn’t have a clue about balance sheets or financial statements,” Diamond said. “But it was nice that we had someone three doors down to use as a sounding board.”

However, the couple did work together on a big case in the early 1990s, defending what was then the Exxon Corp. in a matter related to the Exxon Valdez oil spill. Smith and Diamond moved their family to Alaska for more than a year while they tried the state court case, in which native Alaskans claimed that the spill destroyed their way of life.

Smith, Diamond and fellow O’Melveny partner Randall Oppenheimer successfully defended Exxon in the case. A jury found that the oil giant didn’t have to pay damages as a result of the spill. (O’Melveny represented Exxon in the majority of its oil spill-related litigation. In 1994, in a separate federal case, a jury awarded $5 billion in punitive damages to fishermen and other affected parties. The amount was ultimately reduced to $508 million by the U.S. Supreme Court.)

Smith said that Exxon won the case partly because the jury knew she and Diamond were married.

“I’m convinced that, in addition to our skillful legal representations, one of the reasons the jury was able to be sympathetic to us was because Chuck and I were married,” Smith said. “And it made it very human.”

By then, Smith had developed her own book of business. She’s handled an array of matters for Warner Bros. and the Hospital Corp. of America Inc., and she continues to handle PricewaterhouseCoopers’ West Coast litigation.

“She’s known to be one of the top female litigators in California,” Miles said.

AMD hired Smith and Diamond in 2004, when the company was becoming increasingly concerned about Intel’s alleged anticompetitive behavior. By then, the companies had already settled a 10-year legal battle over patents and antitrust issues.

But AMD filed an antitrust suit against Intel in U.S. District Court in Delaware in 2005, claiming that Intel pressured computer manufacturers such as Dell, Hewlett-Packard and Gateway to use its chips instead of AMD’s. At the time, Intel denied the anticompetitive behavior and the company said the suit was a “legal case full of excuses and speculation,” according to news reports.

Smith said the matter, which involved complex legal issues and facts, was even more challenging because AMD had to prove its case by collecting documents and deposing executives at the numerous distributors that purchased Intel products, computer manufacturers that used Intel chips and retailers that sold computers with Intel components.

During the litigation, the companies exchanged 400 million pages of documents that were in 13 different languages and if printed would encircle the globe three times. They also exchanged 180 gigabytes of financial data, which is equivalent to 14 million pages of spreadsheets or 44,000 copies of the King James Bible.

Smith and Diamond co-headed the case and worked with AMD executives on the overall legal strategy.

Smith also investigated Intel’s relationship with Dell, which was a key aspect of the case because Dell is one of Intel’s largest customers, and she deposed Michael Dell, Dell’s founder and chief executive.

“He came with his coterie and we did it in a special boardroom,” Smith said. “It was challenging, but really fun.”

But as the battle waged on, Smith and Diamond also started facing marital problems. The couple went through a trial separation in 2007 to see if they were really going to get divorced. A few months into the separation, they told AMD about it.

“We told the client, and the client was understandably – having placed a bet-the-company case in our hands – perturbed,” Smith said. “But we were able to reassure Tom McCoy by saying we’ve been separated for months now and you didn’t know and you haven’t noticed any difference.”

However, Smith admitted the divorce took its toll on the couple’s adult son, and Diamond’s two children from his first marriage, who were raised by Smith. The couple did not want to discuss the details of why their marriage fell apart, but Smith did say this much: “It was two powerful alpha dogs fighting for control and thinking they could change the other – which is always a mistake, especially after a long relationship. And there are other factors that I do not want to discuss.”

But Smith said she and Diamond persevered in the office.

“We were united on nothing but the fact that this case had to go forward in the absolute highest professional way,” she said. “If we had a chance of winning there could be no division based on personal feelings.”

The case ended in November, when Intel agreed to pay AMD $1.25 billion in a settlement that calls for quarterly meetings between the companies for mediating disputes over exclusionary practices and a cross-licensing agreement of each other’s patents for five years.

Now, Smith and Diamond said they are forging ahead on other cases and plan to continue to practice at O’Melveny.

The two declined an offer to be photographed together for the Business Journal. However, they do speak highly of each other.

“I continue to regard Linda as one of my best friends and one of my closest colleagues,” Diamond said. “We aren’t shy in expressing ourselves to one another in front of other people and battling who’s right and wrong and who has the best idea. We’ve been famous about that at O’Melveny & Myers for many years.”

For her part, Smith is thinking about taking the story to Hollywood.

“There are three different people who are writers who have offered to do a treatment to send to a studio,” Smith said. “And it is an amazing story. I think it would make a good book or movie.”