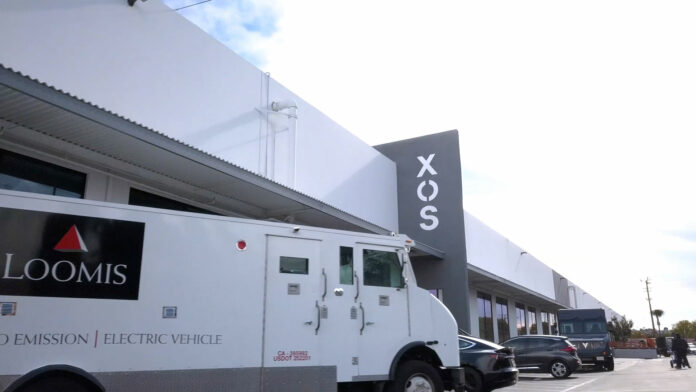 With the price of diesel eclipsing $6 a gallon at the local gasoline stations, Xos Inc.’s fully electric trucks are gaining attention.
“We’re seeing continued strong interest,” said Steve Ivsan, the Glassell Park-based company’s head of program management. “Fuel pricing is a major factor in some of our key customers’ operations, and this has (had) a tough impact for them.”

“One element of success that’s super important for companies in this space is, in order to make the adoption process easier for customers, you have to not only provide vehicles but you need to provide tools to be able to deploy or adopt those vehicles,” Ivsan said, adding that Xos can assist customers with setting up vehicle chargers at their yard, and also offers financing and leasing through a collaboration with DLL Finance in Iowa. Maintenance and service are provided through Indianapolis-based Dickinson Fleet Services, while Xos’ proprietary Xosphere software can be used to manage an EV truck fleet, place a maintenance requests or order more products.

Xos manufactures its trucks at partner factories in Byrdstown, Tennessee and Monterrey, Mexico – Fitzgerald Collision and Repair and Metalsa, S.A. de C.V. respectively – which recently expanded production capacity to 2,000 trucks a year between the two. Ivsan defined the relationship as flex manufacturing rather than contract manufacturing, because Xos sources all the vehicle parts for its trucks, and the two facilities use Xos’ enterprise resource planning system, commonly known as ERP.

“We have a higher level of control, but we’re still able to utilize their building and their skilled labor force to help us build the product most efficiently,” he said.
The production of the X-Pack, its proprietary battery system, Xos is keeping in-house, at its facility in Glassell Park.

“When you look at what is the most important technology, and for the electric vehicle product by far from a cost perspective, and from a supply chain robustness perspective, it’s the battery,” Ivsan said. “By having this vertically integrated, we’re able to possess the key knowledge to be able to harness as much range out of that battery pack, but it also gives us additional flexibility within the supply chain to adapt where we need to, and ultimately control the cost of that product. So this is a significant competitive advantage for Xos.”

Unlike many EV makers that have skipped the traditional dealership model and replaced it with online ordering and customer experience centers at major shopping centers, Xos is banking on established relationships its clients have with their vehicle providers.
Its trucks are available at 30 dealerships in seven states, including a partnership with Kansas-based Murphy-Hoffman Co. announced last month that will bring Xos trucks to Colorado, Illinois, Oklahoma, Missouri, Pennsylvania, and Texas.

“We think it’s really important to have strong partnerships with existing dealers,” Ivsan said. “They have an incredible amount of history with their customers, they know what they’re looking for, and they can help us tailor our offerings. Also, it’s important to note that for us being able to maintain and service these vehicles is paramount, and that that experience goes as smoothly as possible. And having strong dealer partners helps us with getting access to those services as well.”

He added that being a new company, Xos has to “build that trust with customers and when we can align with partners that already have that trust built over potentially decades, that for us, is really important.”
Xos also sells through Austell, Georgia-based Yancey Bros. Co., which dubs itself as nation’s oldest Caterpillar dealer.

Xos’ customer pool includes FedEx Ground operators, Loomis Armored U.S., Merchants Fleet, and UniFirst Corp., a Wilmington, Massachusetts-based uniform company. Xos delivered three vehicles to UniFirst’s Santa Fe Springs plant this month
“We are continuously working to reduce our environmental impact and transitioning our fleet from diesel to electric is important to us,” Michael Croatti, executive vice president of operations for UniFirst, said in a statement. “The vehicles from Xos will help us reduce our overall emission output.”

In the second half of this year, additional vehicles will be delivered to a UniFirst location in Boston, according to the company.
Xos wrapped up last year with a 40-truck order from Route Consultant, a route broker for FedEx Ground contractors. Ten trucks will be delivered this year to Springfield, Illinois, 20 to St. Louis and 10 to Terre Haute, Indiana.

Xos has more than 350 employees, up from 180 in June and 300 in January.
“We are definitely hiring more,” Ivsan said. “We spent a lot of time developing several new products …and we’re starting to ramp up our facilities. I can’t speak to specific numbers because of the quiet period, but with that scaling process…we have a lot of hiring in that area and anything that really supports further scale of our products.”

Xos began trading on the Nasdaq on Aug. 20 after completing a merger with NextGen Acquisition Corp. The completion of the combination resulted in net proceeds of nearly $217 million. Raised capital is expected to support the execution of Xos’ strategic plan into second half of next year, according to the company.

In addition to climbing diesel prices, Ivsan said another force includes the Securities and Exchange Commission’s move last year to create a Climate and ESG Task Force that will develop initiatives to identify environmental, social and governance-related misconduct.

“I think overall the world and especially the U.S. has really embraced electrification,” Ivsan said. “I think everybody understands now, one – it makes business sense – and two – it’s the right thing to do. So for us now, the challenge as a company is to satisfy those orders, to ramp up and scale production with in Tennessee and Monterey as fast as we can while maintaining perfect reliability and quality.”