A luxury apartment complex in Santa Monica that attracts celebrity tenants has sold for $330 million or $2.75 million a unit – a record amount on a per-unit basis for a larger rental property in the city.
Santa Monica-based Douglas Emmett Inc. purchased the 120-unit property at 1221 Ocean Ave. from Newport Beach-based Irvine Co.

Douglass Emmett did not immediately respond to requests for comment but discussed the sale during an earnings call. Jordan Kaplan, Douglas Emmett’s president and chief executive, called the property “one of the most prestigious and best-located multifamily assets on the West Coast with panoramic ocean views from every unit.”

“It was a very good fit for us, and we were able to negotiate a deal that made everybody happy,” he said during the call.
The property is 98% leased. Its units are an average size of 1,500 square feet.
Kevin Crummy, the company’s chief investment officer, said during the earnings call that the company would continue a major renovation on the project. The renovations include upgrading the units and the common areas.

The complex has been a known home of Hollywood elites over the years with rents reported to average $15,000 a month.
The property, which touts its ocean views, consists of one-, two- and three-bedroom apartments with high-end finishes. Amenities include a rooftop pool with ocean views, a club, a business lounge, dining and a fitness center. The Santa Monica Pier is three blocks south.

That led Irvine Co. to pay a reported $44.1 million for the property in 1998. Celebrities such as Britney Spears, Larry David and Michelle Pfeiffer have called the property home at one time or another, according to a New York Post article.
Dean Zander, executive vice president at CBRE Group Inc., said properties in desirable areas that are hard to replicate and have a lot of amenities are in high demand now.

“It’s very hard to build that kind of product and you can set your own rents when you have that kind of fully amenitized housing that competes with single family and even kind of surpasses single family,” he said.
Santa Monica as a whole has seen strong rent numbers.
In the Santa Monica/Marina del Rey submarket, the average rent in the first quarter was nearly $3,686, according to data from CBRE. It’s the highest average rent of any submarket, the brokerage found. It also represented more than a 13% increase over the previous year and 3.8% over the previous quarter.

Douglas Emmett, whose headquarters is steps away from the apartment acquisition, recently reported its first quarter earnings.
The company owns and operates 18.2 million square feet of Class A office properties and 4,415 apartment units in Los Angeles and Honolulu.

The Santa Monica acquisition, as well as projects the company is developing and leasing in downtown Honolulu and in Brentwood, will add roughly 1,000 units to Douglas Emmett’s portfolio.
The Brentwood project, dubbed the Landmark Los Angeles, is currently being leased. It is the first new residential high-rise development west of the 405 freeway in more than 40 years, according to Douglas Emmett, and has 376 units stacked in a 34-story tower.

Kaplan said the company will continue to look for high-end assets like the Santa Monica acquisition going forward.
“All the way across our portfolio, both in office and residential, we are trying – we’re targeting the high end, and this was a fantastic fit for us. We just built something at the top end; we own other stuff here along the coast that we’re doing work on, that is at the top end. All the moves we’ve made have been to have the highest and the most premium residential and office portfolio,” Kaplan said during the earnings call.

During the first quarter, the company reported a revenue increase of more than 10%.
But it may not be all smooth sailing in the future.
“Looking forward, rising interest rates and inflation will present us with both challenges and opportunities,” Kaplan said during the call. “We are prepared for the challenges and remain ready to take advantage of the opportunities.”

Douglas Emmett bought the Ocean Avenue complex through a joint venture the company manages in which it owns a 55% interest.
For the acquisition, the joint venture received a $175 million interest-only term loan that matures in 2029. 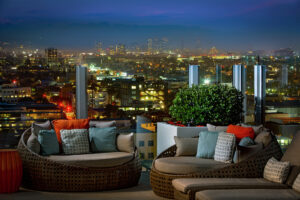